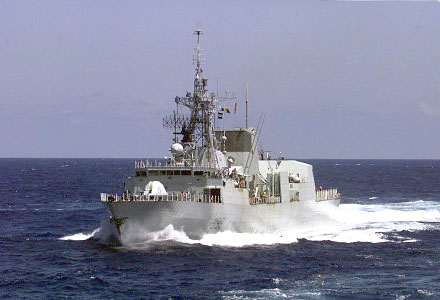 From NATO:   In the early hours of Thursday 12 May 2011, while conducting Embargo patrols in the waters off the coast of Libya, NATO warships participated in a coordinated defence against a small boat attack threatening the port city of Misrata.

Beginning at approximately 2 a.m. the Canadian Frigate HMCS CHARLOTTETOWN acting in concert with the British Destroyer HMS LIVERPOOL and supported by a French warship not under NATO Command, thwarted an attack on the port of Misrata by a number of fast small boats.  The boats were forced to abandon their attack and regime forces ashore covered their retreat with artillery and anti-aircraft canon fire directed towards the allied warships.

HMCS CHARLOTTETOWN responded with a short burst machinegun fire and HMS LIVERPOOL also returned fire.  Neither warship sustained any damage or injury during this engagement.

This is the second action by pro-Qadhafi forces at sea and follows the mining of the approaches to Misrata harbour two weeks ago.  NATO forces destroyed two mines and swept the area allowing safe passage for ships.

OPERATION UNIFIED PROTECTOR is the NATO-led mission to protect civilians in Libya and enforce the United Nations Embargo. NATO’s sustained maritime presence in the littoral waters of Libya began on 23 March 2011, aiming to diminish the capacity of the pro-Qadhafi forces to carry out brutal and systematic violence against the people of Libya.  The actions of coalition warships on the morning of 12 May are an example of NATO’s continuing success in stopping regime forces from attacking civilians.  (photo: Canadian Navy)