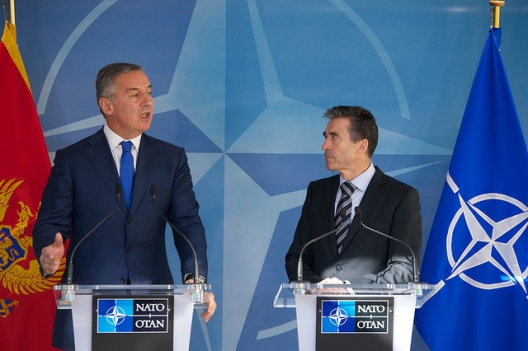 Faced with a newly aggressive Russia, NATO has been mulling how to react, but it is ruling out one option: rapid expansion.

Four would-be members, including the former Soviet republic of Georgia, have been informed that admission to NATO isn’t in the cards anytime soon. For some, that means dashed hopes. Macedonia’s foreign minister told The Associated Press in a statement it was a “step backward.”

The bottom line: The North Atlantic Treaty Organization, celebrating important anniversaries this year of a dozen nations joining its ranks, will welcome no new members when President Barack Obama and other leaders convene for a summit in Wales in early September.

Analysts say that NATO members are worried about granting, or being perceived as granting, security guarantees that could quickly be tested by Russia. That’s particularly true of Georgia, which has been waiting since 2008 for the U.S.-led military alliance to make good on its promise of admission. . . .

But even before Crimea’s annexation, some NATO countries were experiencing “enlargement exhaustion” and had become reluctant to increase the alliance’s membership rolls, said Jorge Benitez, senior fellow for trans-Atlantic security at the Atlantic Council, a Washington, D.C.-based think tank.

Montenegro, is widely considered the candidate closest to achieving membership. Rasmussen said that by the end of 2015, NATO foreign ministers will assess whether “the time is ripe” to invite Montenegro to join. That deadline was the only one to come out of the July 24-25 Brussels meeting of foreign ministers that reviewed NATO’s “open door” policy.

What was not spoken about publicly was the reason for NATO’s delay: the reported penetration of Montenegro’s intelligence service by the Russians.

“That was the sticking point,” a NATO official told AP. He spoke on condition of anonymity because he was not authorized to speak on the record. He estimated the number of Montenegrin intelligence agents with links to Russia at between 25 and 50. Steps are already under way to neutralize their activities, he added, but that “it will take some time to manage.”

Prime Minister Milo Djukanovic told his country’s parliament that the decision on enlargement had been postponed because of “geopolitical reasons Montenegro cannot influence.”