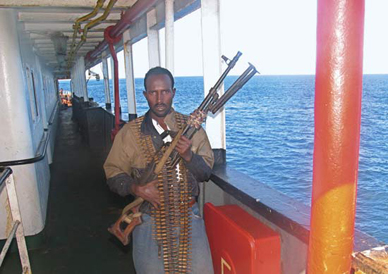 From AP:  NATO officials say no ships have been hijacked off the Somali coast in the second half of this year, reflecting a sharp decrease in piracy along one of the world’s busiest shipping routes. . . .

From NATO:  A combination of factors including stepped up naval patrols closer to shore is leading to a drop in pirate attacks off the Somali coast, the former commander of NATO’s counter-piracy mission said Monday (17 December).

However, international naval patrols off Somalia’s coast will still be required to stop piracy on the high seas, said Dutch Commodore Ben Bekkering. He briefed NATO’s Military Committee on Monday on mission progress during his six-month term as commander of NATO’s Ocean Shield operation until earlier this month.

Commodore Bekkering said that operations close to shore “to deter pirates but also to reassure the local population” have led to no new hijackings of merchant vessels over the past six months. Bekkering said that the NATO mission was able to disrupt another four attacks as well. “I think we have been able to really limit the ability of the pirates to go to sea,” the Commodore said. “This has been the first clean slate for a long time.”

NATO currently has four ships from Italy, the United States, Turkey and Denmark participating in its counter-piracy mission. He said that NATO ships are coordinating closely with other vessels from the Combined Maritime Forces (CMF), European Union member states, China, and Russia to prevent attacks.

He said this coordination along with improved communication with local fishermen and better security measures by merchant vessels was having a real impact.

However, he cautioned that new attacks could not be ruled out because of ever-changing tactics by pirates. “They can come back, so we need to continue the pressure but I think we can be fairly happy with the results that we have had so far. It is now a matter of continuing that,” said the Commodore.