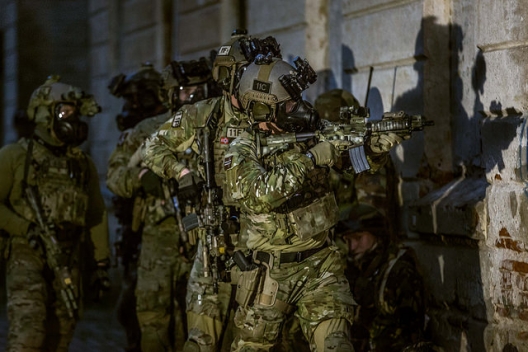 The Pentagon is increasingly concerned about how to combat “hybrid warfare,” the combination of stealth invasion, local proxy forces and international propaganda that Russia used to annex Crimea and destabilize eastern Ukraine, U.S. officials said. …

“This is something that we have to do better as the United States to identify and deal with,” Rep. Mac Thornberry (R-Tex.), chairman of the House Armed Services Committee, said in an interview. “This poses a challenge for us, and adversaries know that. They’re looking to run between the seams and confuse and delay us.”

Thornberry has included a provision in the 2016 National Defense Authorization Act calling on the Pentagon to develop a strategy to counter hybrid warfare.

“Hopefully, this provision in the bill helps Secretary Carter get more of the thinking and the intellectual heft of the department in helping us have a more effective response,” Thornberry said.

Gen. Philip M. Breedlove, NATO’s top military commander and the commander of all U.S. forces in Europe, said that NATO and U.S. Special Operations forces had begun working with countries with substantial Russian minorities, such as Estonia and Latvia, to help them prepare for potential subversion from the east.

“We have groups of people, primarily in our special forces, that help work with nations to help understand those skills and those capabilities and capacities in their nations to address hybrid warfare,” Breedlove said….

Hybrid warfare “is one of the dimensions of our adaptations and very important [for] countries surrounding Russia that don’t want to be susceptible to the kind of thing that happened in Crimea,” [Secretary of Defense Ash] Carter told reporters.