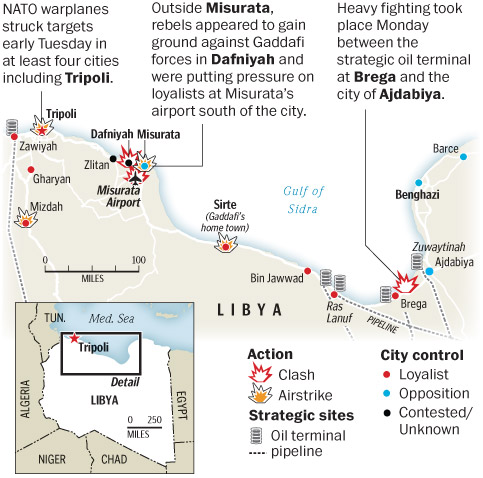 From Michael Birnbaum and Joby Warrick, the Washington Post:  NATO carried out its most forceful attacks in weeks in Libya on Tuesday , part of an apparently coordinated push with rebel forces to bring an end to Moammar Gaddafi’s 41-year-long rule.

NATO warplanes pummeled command-and-control targets in four cities, including Tripoli and Gaddafi’s home town of Sirte. U.S. officials said NATO had increased the tempo of its airstrikes throughout the country, and members of the alliance spoke of improved targeting of dug-in loyalist forces, made possible in part by the presence of U.S. Predator drone aircraft. . . .

The new assault appeared to reflect increased cooperation between NATO and the rebel army, allowing the rebels to make modest gains on the ground this week, particularly in and around the western city of Misurata. Although it was too early to tell whether the advances would mark a meaningful turning point in a conflict that has left the country divided since February, the progress “shows where the momentum lies,” said a European diplomat privy to NATO’s internal discussions. . . .

The official also stressed the importance of Tuesday’s NATO bombings in Tripoli. Several alliance members, eager to avoid a protracted stalemate in Libya, have been pushing NATO to be more aggressive in striking Gaddafi’s center of power, despite concerns about possible civilian casualties. . . .

NATO confirmed Tuesday that Predator drones had teamed up with British fighter jets in an attack earlier in the week on a Misurata building that was being used by Gaddafi forces to direct artillery and rocket fire. One of the unmanned planes conducted surveillance of the building and helped guide a pair of Royal Air Force Tornados to the site. The jets fired missiles that knocked out the building’s upper floors, where the loyalists’ spotters were operating, an alliance spokesman said.  (graphic: Washington Post)