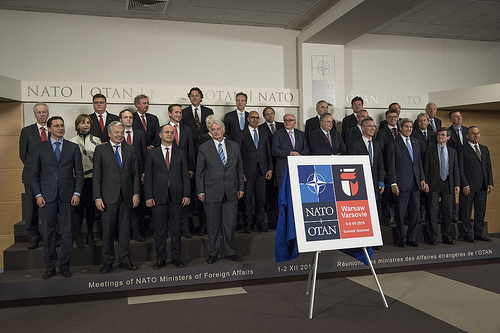 The situation along NATO’s south-eastern border remains highly unstable. We reiterate that the security of the Alliance is indivisible and that Allies stand in strong solidarity with Turkey, which is facing multiple challenges from the south including terrorist threats. NATO Defence Ministers discussed this at their meeting in October and tasked work on further steps to assure Turkey’s security. Today we reviewed this work, which is advancing.

Long-standing NATO plans for the defence of Turkey are in place and are kept under active review. In view of the general volatility in the region, these are being further strengthened. On the basis of our December 2012 decision, the Alliance has been augmenting Turkey’s air defence. We remain determined, in a spirit of 28 for 28, to continue developing additional NATO assurance measures and Allies are working to prepare other possible contributions. We expect this work to be finalised in the coming weeks.

We will continue to follow the developments on NATO’s South-Eastern border very closely, including the ongoing crisis in Syria. We reaffirm that the conflict in Syria can only be ended through a genuine political solution and underline the importance of ongoing international efforts to this end.

Finally, we reiterate our support for the territorial integrity of NATO Allies. The Alliance calls for calm, diplomacy and de-escalation and highlights the importance of risk reduction measures.

Statement by NATO Foreign Ministers on Assurance to Turkey, December 1, 2015.