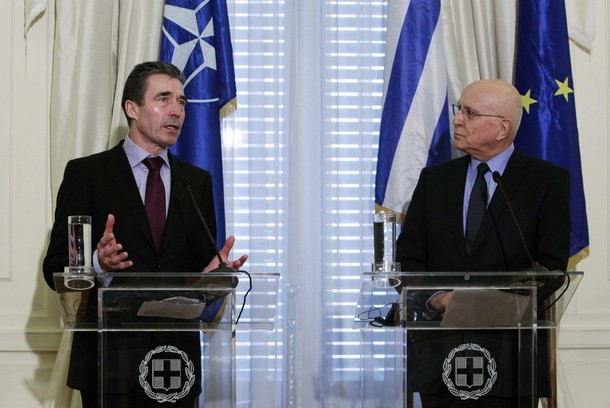 From Gregory Viscusi, Businessweek:  While Greece struggles to stay in the euro, its membership in NATO is another story altogether.

“It’s a major part of their identity, and they would do what they have to do to maintain being a NATO member of good standing,” Charles Ries, U.S. ambassador to Greece from 2004 to 2007, said in a telephone interview before yesterday’s voting in Greece.

Even Alexis Tsipras, who finished second on promises to renege on the terms of a European Union-led bailout, made a campaign appearance at the Defense Ministry May 29, criticizing pay cuts for soldiers and declaring Greek territory “non- negotiable.”

The country risks running out of money by July unless election winner Antonis Samaras quickly assembles a coalition that can secure the next aid disbursement. The question of Greece leaving the euro, once taboo, is openly discussed in European capitals. A Greek exit from the euro would be unlikely to undermine its role in NATO because security is one of the few issues that most Greeks agree on.

“Leaving the euro is not the same as leaving NATO,” said Paul Sullivan, a specialist on security issues at Georgetown University in Washington. “NATO was there well before the botched up euro zone. . . .”

In the past decade, Greece has been the EU’s biggest military spender as a share of the economy.

“The Greek military has been so oversized in the past that even if spending were cut in half, it would still rank in the upper half of NATO members,” said Karl-Heinz Kamp, director of the research division of the NATO Defense College in Rome. . . .

As a percentage of the economy, spending fell to 2.3 percent in 2010 from 3 percent in 2009. German military spending, by comparison, is 1.4 percent of gross domestic product while Italy’s is 1.7 percent.

Greek governments have justified the high spending because of tensions with Turkey, a border with former Warsaw Pact states, and the challenges of controlling thousands of islands.

Some of those justifications are now obsolete. Relations with Turkey have improved. Turkish Premier Recep Tayyip Erdogan, during a visit to Athens last month, said they should work to cut military spending. Bulgaria and Albania are now NATO members, and only a naming dispute is holding up Macedonian membership in the alliance. . . .

Air bases in Crete were used during NATO’s air war over Libya last year, and NATO ships use deepwater bases in Corfu, near Athens, and Souda Bay in Crete. While NATO countries don’t charge each other rent for ships that stop at bases, providing fuel, food, and supplies is a major part of the local economy, Ries said, recalling that crew from a U.S. aircraft carrier once spent $8 million ashore during a weekend stop in Corfu.  (photo: Reuters)