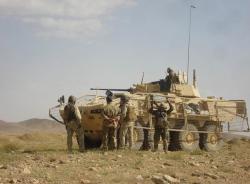 From the AP:  As the drawdown of U.S. troops from Afghanistan steps up in 2012, NATO military planners are trying to figure out the logistics of how to ship out the massive quantities of alliance vehicles, weapons and other equipment from the mountainous landlocked country.

The operation requires the removal of $30 billion worth of state-of-the-art military gear by the end of 2014, when U.S. and other coalition troops are to end their combat role, a senior NATO official said Tuesday.

Most of the American equipment will be shipped to military depots in the United States for refurbishment and then redistributed to bases around the country, but some assets will go to bases in Europe, primarily Germany, or in Asian nations such as South Korea.

"The stuff we have here is the very best the U.S. has ever produced," the NATO official said. . . .

Aside from the armored vehicles and trucks, other gear that will be shipped out includes large quantities of armor, communications and optical equipment, and large crew-served artillery systems.

In 2011, the U.S.-led coalition began the withdrawal of nearly 140,000 foreign troops serving in Afghanistan, and 10,000 U.S. service members have already pulled out. By the end of this year, another 23,000 Americans are due to depart, along with thousands more allied soldiers, which will reduce the coalition force in Afghanistan to about 90,000.  (photo: Getty)