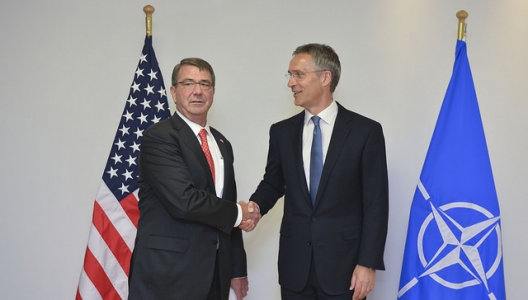 Nato, in an echo of the cold war, is preparing to re-evaluate its nuclear weapons strategy in response to growing tension with Russia over Ukraine, sources at the organisation have said. …

A Nato diplomat said: “There is very real concern about the way in which Russia publicly bandies around nuclear stuff. So there are quite a lot of deliberations in the alliance about nuclear [weapons], but it is being done very slowly and deliberately. We need to do due diligence on where we are.”

The issue is being discussed on the margins of a two-day Nato ministerial meeting that began in Brussels on Wednesday. But the US is keen to get the issue on the table and a meeting of Nato’s ministerial nuclear planning group is likely to be held later this year – earlier than planned – to discuss refreshing the nuclear doctrine….Among potential topics is an enhanced role for nuclear weapons in Nato military exercises. Also up for discussion would be how to better interpret Russian warnings about nuclear weapons: whether they should be taken seriously or whether these amount to no more than rhetoric.

Nato’s secretary general, Jens Stoltenberg, speaking at a press conference on Wednesday, said the nuclear issue was serious and had to be treated with caution. “The nuclear activities, the investments of Russia in new nuclear capabilities, and the exercise activities by Russia in the nuclear domain is part of the global picture where we see a more assertive Russia.”

The American ambassador to Nato, Douglas Lute, briefing journalists in Brussels on Tuesday, said: “There is a general assessment under way in Washington and a parallel assessment here in Nato to look at all the possible implications of what Russia says about nuclear weapons, its doctrine and so forth, its pronouncements, its rhetoric, and what we actually see on the ground in terms of development and deployment.” Nato, he added, had not yet reached any conclusions or decided on “what are the actions that are implied in our response….”

A second Nato official said: “The Russian leadership is rhetorically lowering the threshold when it comes to nuclear weapons and this is something which should not be done. It largely wasn’t done even during the cold war.