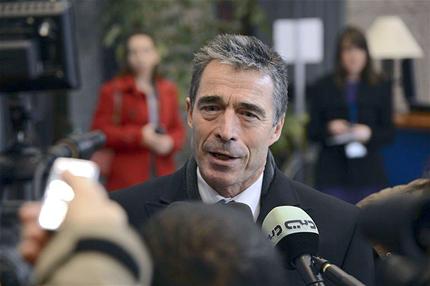 From Hurriyet Daily News:  NATO chief Anders Fogh Rasmussen today said the alliance would consider a request from Turkey to deploy Patriot anti-missile batteries along its border border with Syria "as a matter of urgency", AFP has reported.

Rasmussen, arriving for a meeting of European Union defence ministers, said NATO had received no formal request from NATO-member Turkey to date but added that if one was made, "we will consider that as a matter of urgency".

German Defence Minister Thomas de Maiziere said earlier that he expected a request on Monday from Turkey, whose border villages have been hit by artillery fire as forces loyal to Damascus battle rebels seeking to oust President Bashar al-Assad.

"The situation on the Syria-Turkey border is of great concern," said Rasmussen.

"We have all the plans ready to defend and protect Turkey if needed. The plans will be adjusted if necessary to ensure effective protection of Turkey." Rasmussen said there was no question currently of imposing a no-fly zone with the back-up of the Patriot missiles.

"The Patriot missiles would be a purely defensive measure to defend Turkey." He also said it was "premature" to comment on German reports that Berlin planned to send 170 soldiers to Turkey to man the missiles.

But he added: "Turkey can count on allied solidarity. . . ."

“I can’t say when precisely the request will be made, but it will be soon,” diplomatic sources told the Hürriyet Daily News over the weekend following German daily Süddeutsche Zeitung’s report claiming Ankara’s appeal will be made today.  (photo: AFP)