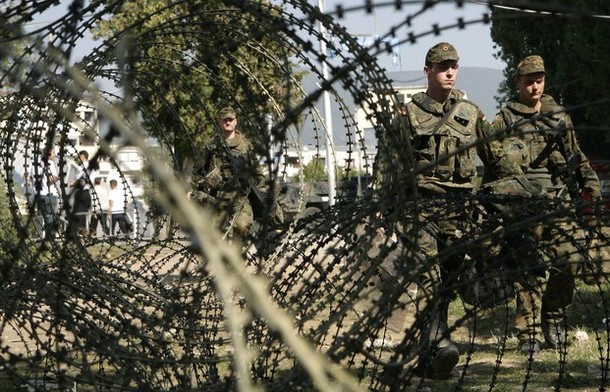 From AFP:  NATO peacekeepers and European Union law-enforcers in Kosovo on Thursday closed an illegal border crossing that ethnic Serbs in the Serb-dominated enclave in northern Kosovo had opened with Serbia, in the latest move in a tense standoff that began nearly three months ago.

German troops from the KFOR peacekeeping mission closed the ‘alternative’ route across the border in the early morning. The Serbs had opened the route a week ago.

The last time KFOR closed an illegal crossing in late September, violence erupted, with several ethnic Serbs and [NATO] soldiers wounded.
The Serbs have been opening their own crossings to circumvent controls that the ethnic Albanian-dominated Kosovo government has imposed on the borders of Kosovo.
EU’s law enforcing mission in Kosovo, the EULEX, also took part in the mission aimed at sealing the porous border between northern Kosovo and Serbia. EULEX is tasked with border controls, but requires KFOR’s support amid the threat of violence.
‘Unauthorized routes evade legitimate controls and road blocks are illegal and help no one,’ EULEX acting chief, Andy Sparkes, said in a statement.
The roadblocks Sparkes referred to have been erected and maintained by Serbs throughout northern Kosovo since a trade row erupted into tensions in the border area in late July.  (photo: KFOR)
European Union International Organizations Politics & Diplomacy