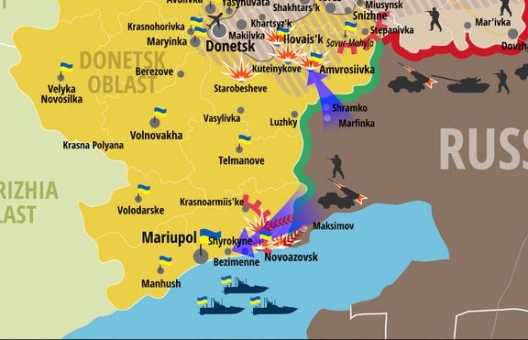 Russia has “well over 1,000 troops” operating inside Ukraine, Nato warned on Thursday, as Moscow faced an intensifying backlash over growing evidence of its direct military involvement in the former Soviet country’s uprising in the east.

“Russia is trying to prevent a defeat of the separatists and want to hold on to this area,” a senior Nato officer told reporters at its military headquarters in the Belgian town of Mons. He added that the estimate was “quite a conservative” one.

The official also said that there were about 20,000 Russian troops amassed at the border with Ukraine and that the troops were “far more capable than what we saw in March . . . an offensive army. . . .”

The Nato officer said the alliance believes the decision to send regular Russian troops with artillery into eastern Ukraine was a direct consequence of the downing of Malaysia Airlines flight MH17, saying it ensures skilled soldiers are operating the vehicles.

Among the assets Russia now has inside Ukraine are self-propelled artillery batteries, according to satellite imagery shown to reporters.

The officer said that in addition to training separatist units and manning artillery batteries, there is increasing intelligence that Russian forces are “taking the fight” against the Ukrainian military directly.

“It’s no longer the hand from behind,” the officer said. “There is clear evidence of contact between Ukrainian forces and Russian forces.”