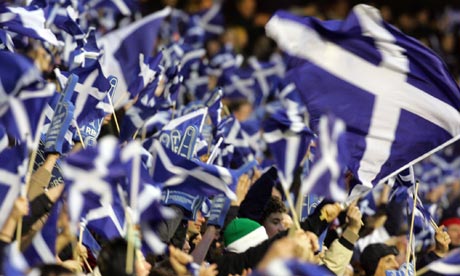 From BBC:  Nato has said that if Scotland was considered to be a "new state" it would need to reapply for membership. . . .

Nato said it had had no discussions on the possibility of Scottish independence, and pointed out that any arrangement would have to be agreed by all member countries.

But it said that a new state would not be a party to the North Atlantic Treaty, and therefore not a member of the alliance, while the position of the "successor state" would be unaffected.

In a written response given to BBC Scotland, it said: "It appears widely agreed that, as a matter of law, a Scotland which has declared its independence and thereby established its separate statehood would be viewed as a new state."

"In the Nato context, the definitive determination on this question would be made by the member states, acting in the North Atlantic Council."

"A new state would not be a party to the North Atlantic Treaty, and thus not a member of Nato. If it were to choose to apply for Nato membership, its application would be subject to the normal procedure, as outlined in Article 10 of the Treaty."‪   (photo: Damien Meyer/AFP/Getty)