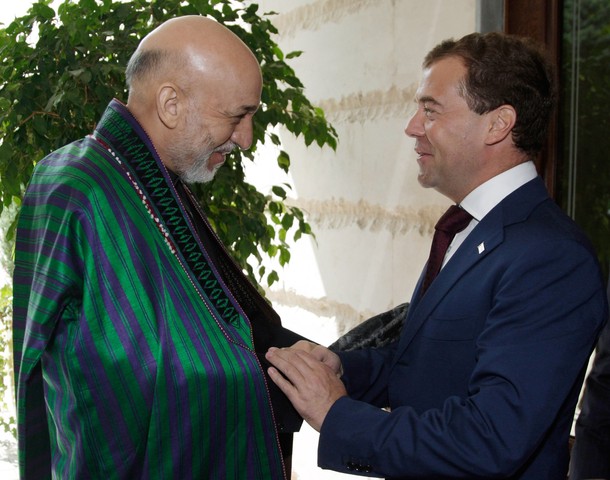 From the Independent:  The Great Game reasserts itself. Dmitry Medvedev will attend Nato’s summit in Lisbon next month, where the Russian President is expected to provide help for the Western military alliance’s faltering mission in Afghanistan.

There is little prospect of Russia sending troops to the country, but this is, nevertheless, a remarkable turn of events. Two decades after the Soviet Union withdrew from Afghanistan, after a disastrous 10-year occupation which left 15,000 Russian troops dead, Moscow is coming back. Russian engineers are to renovate infrastructure projects, including power stations built during the Soviet occupation, and to provide helicopters for overstretched Nato forces.

Russia has a clear national security interest in stabilising Afghanistan. Moscow does not want chaos to its south when Nato forces depart. Yet the deal is also drenched in realpolitik. The quid pro quo for Russian support is understood to be that Nato will mute its support for Georgia and also rein in its ambitions for expansion into eastern Europe. …

The plan does not come from out of the blue. Russia’s foreign minister, Sergei Lavrov, outlined a potential deal last month, in which Russia would help to stabilise Afghanistan. And Moscow already permits the transit of certain supplies across Russian territory. An agreement is also in place allowing Nato planes to pass through Russian airspace. With Nato’s land supply routes through Pakistan under increasing pressure, the logic has long been closer co-operation with Moscow.