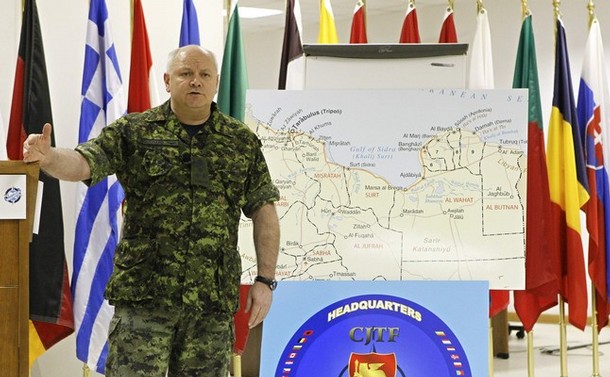 From Fiona Ehlers, Spiegel:  The ballroom in Naples is the secret command center in NATO’s war against Gadhafi. Some 350 men and a handful of women sit there in front of computer screens, serving as the military alliance’s eyes and ears in a war that has been raging for the last three months. Total silence reigns in the war room, as the ballroom is now called, and all mobile phones are set to vibrate.

To make its daily decisions on which targets to attack, NATO has set up a task force consisting of Air Force generals, diplomats, attorneys, media analysts, IT specialists and intelligence agents, the best of the best from Canada, Italy, France, Great Britain, the United States and, despite Berlin’s abstention from the UN Security Council vote giving NATO the green light to conduct air raids, from Germany, too.

So-called targeters, who define the bombing targets in Gadhafi’s realm, sit behind room dividers made out of glass onto which maps of Libya are taped. They base their decisions on photos taken by reconnaissance aircraft, Twitter messages, intercepted radio communications from the Libyan army and information from Western journalists in contact with the rebels. Their most important information, however, comes from the allied nations’ intelligence agents stationed on the ground in Libya.

All of this data is then pieced together in the Naples war room. Since the beginning of Operation Unified Protector in late March, it has been up to the team in Naples to determine whether, when and with what weapons Gadhafi’s command centers or his private residence are to be bombed, and how best to avoid civilian casualties. . . .

Charles Bouchard, a Canadian three-star general, is rushing through the war room, a place very few journalists have been allowed to enter until now. Bouchard, the commander of the Naples operation, is visibly proud of the more than 10,000 missions flown to date. He approves each individual target, but sometimes he also deletes a target from the list at the last minute if, for example, boys are suddenly seen playing football nearby.  (photo: Reuters)