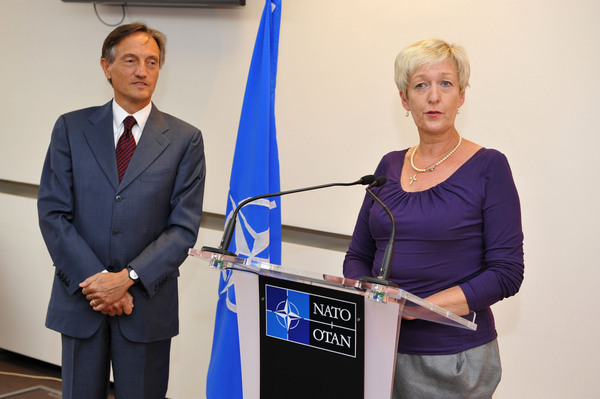 From Stefanie Babst, atlantic-community.org:  Most citizens find the policy- makings of large international organisations like the EU or UN too complex and far away from their day-to-day concerns.

Where does the Transatlantic Alliance fit in this, in particular now that NATO approaches another Summit that will take place in Lisbon at the end of the year?

The good news is that the Alliance still enjoys a recognisable brand. As international and national surveys show, NATO is widely associated with security and defence and perceived as a transatlantic provider of peace and security. According to the Transatlantic Trends that the German Marshall Fund published on 15 September 2010, majorities (59%) in 11 European countries and the United States (60%) still believe that NATO is essential for their security. The exception is Turkey where only 30% believe NATO is essential.

Interestingly, 62% of the 11 European nations would also support a NATO role outside Europe, whereas 32% prefer NATO to focus on Europe itself. In the US support is much larger with 77% saying that NATO should act outside Europe, if need be. Even in Russia, opinions about NATO are improving. In 2009, only 24% of Russians held a positive view of NATO; currently 40% express a favourable opinion, whereas 40% still view NATO unfavourably.

But the Allies are well advised not to take public support for NATO for granted. First, the NATO-led operation (ISAF) in Afghanistan remains a case in point. The prevailing view in many European nations is to see the number of their troops reduced or their forces totally withdrawn. As the GMF survey revealed, more than half of West Europeans want to see their troops being withdrawn from or reduced in Afghanistan with Poland being highest on the scale (77%) and Turkey lowest (with 47%). Support for NATO’s operation in Afghanistan has also started to decrease in the United States where 41% wish their troops coming home or being substantially reduced. …

No single government can tackle this expanding number of problems on its own. The Alliance remains the best and most effective transatlantic forum to do exactly this. But NATO’s current and future efforts to play an efficient role as a security provider have not been fully understood by our publics.

So how does NATO respond to this? Surely, the Allies have come quite a long way in embracing a new and modern understanding of their common communication policies. Now transparency, responsiveness, accuracy of information and direct engagement with people across Allied territory and far beyond have become the pillars of NATO’s public diplomacy philosophy.

More than ever, journalists, think tankers, decisions-makers and NGOs are populating the Headquarters’ corridors or meet with NATO civilian and military experts in countless public gatherings. But NATO leaders have also become more accessible for average citizens. Every year thousands of visitors come to the Headquarters to discuss the transatlantic security agenda with national and NATO officials and, if he is around, even with the NATO Secretary General.

For sure, NATO does not hide behind confidential documents, nor does it avoid critical questions. In the past years, it has especially enforced its efforts to reach out to the young generation, through facilitating networks among students and young political leaders, offering summer schools and fellowships and organising seminars and workshops across NATO and partner nations. …

For sure, NATO has come to understand how important a modern and responsive public diplomacy strategy is for the organisation. They have grasped that NATO’s image, for good or for worse, rests in their own hands. Ultimately, however, a strong and positive brand can never be constructed through slogans and logos alone. It needs to be earned through convincing policies and political actions – and this is exactly what the 28 Allies are trying to achieve together on a daily basis.