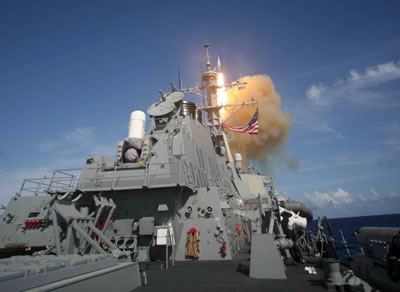 From Anders Fogh Rasmussen, the Wall Street Journal:  Last month, NATO conducted a historic exercise: the first comprehensive test of the alliance’s new missile-defense capability. A U.S. ship, radar and satellite, as well as interceptor batteries from Germany and the Netherlands, conducted a series of simulated engagements to test the alliance’s ability to defend against missile attacks. The test was successful. . . .

Today, we face a grave and growing threat from the proliferation of ballistic-missile technology. More than 30 countries have acquired such technology or are working to acquire it. Some already have missiles that can be fitted with conventional warheads or weapons of mass destruction, and some of these missiles can reach Europe. That’s why the U.S. and European allies are working together within NATO to develop appropriate responses. . . .

The U.S. and a number of European allies have announced their intention to contribute interceptors, sensors and control systems, as well as to host key parts of the overall system. At our summit in Chicago on May 20-21, we will declare an interim capability that brings these individual contributions together under NATO command and control.

This interim capability will provide the alliance with a limited but operationally meaningful and immediately available capability against a ballistic-missile threat. It is the first step, but a real step, toward providing full coverage for all NATO populations, territory and forces in Europe. . . .

From the very beginning, the whole point of NATO missile defense has been to go beyond the U.S. contribution. European allies are fully involved—supporting it politically, sharing the costs, and providing substantial assets of their own. Many different assets from European allies are being drawn together with the U.S. assets into a common, integrated and shared NATO capability.

The alliance has already developed an initial command-and-control system to link the U.S. assets with sensors and interceptors provided by European allies. This part of the system is designed by NATO, paid for by NATO, and operated by NATO.

After the Chicago summit, we will continue to expand the system toward full operational capability. The Netherlands has already announced plans to upgrade four air-defense frigates with missile-defense radar. France plans to develop an early-warning capability and long-range radar. Germany has offered Patriot missile batteries and is hosting the NATO command-and-control at Headquarters Alliance Air Command in Ramstein. Turkey, Romania, Poland and Spain have all agreed to host U.S. assets. I expect more announcements in the months and years ahead.