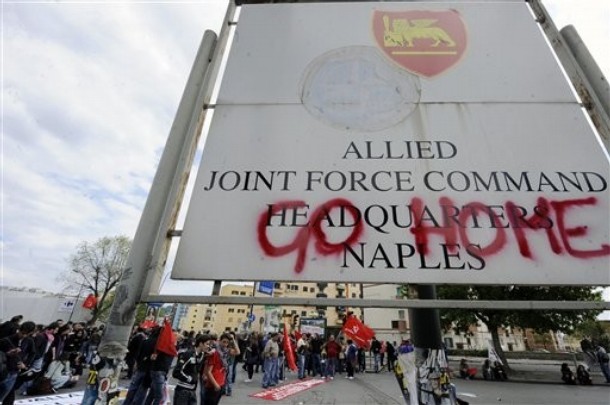 From Andrew A. Michta, the American Interests:  As spring 2011 bursts into bloom, the NATO alliance finds itself withering on the vine. An alliance that was once the quintessential expression and spearpoint of the Transatlantic security relationship is now at risk of undermining it. Notwithstanding the adoption of a New Strategic Concept and Critical Capabilities Initiative at the November 2010 Lisbon Summit, internal differences over Afghanistan and a widening Transatlantic gap in defense spending are fast overshadowing the larger imperative of Euro-American security cooperation. All signs point to accumulating distress. . . .

The devolution of NATO as a premier Transatlantic security organization has proceeded in tandem with the decline of American influence on the Old Continent, a good bit of which appears to be self-induced. In the larger European context, the United States no longer leads on key security issues, instead assuming the role of an increasingly behind-the-scenes enabler. The Obama Administration’s domestic priorities, too, coupled with challenges in Asia and the Middle East, have made the Transatlantic nexus even less prominent in American thinking. Finally, the Obama Administration also places a premium on engagement with difficult states and partnership initiatives outside the core of NATO. The President himself rarely speaks of allies, and in his September 2009 address to the UN General Assembly he said that the “alignments of nations rooted in the cleavages of a long-gone Cold War” make no sense “in an interconnected world.” That, if not a repudiation of NATO, is the closest thing to it uttered by any U.S. President since Harry S. Truman. . . .

Germany is fast emerging as the Continent’s political leader. Is the German political class capable of lifting its gaze beyond its own borders, and then beyond the borders of a Europe very nearly whole and free, to be a leading partner with the United States in guiding the Transatlantic relationship to work to benefit the whole world? That, to put it mildly, remains to be seen. . . .

Even European countries that have historically been able to maintain a meaningful set of capabilities, such as France and the United Kingdom, have made or plan to make significant reductions in defense spending. This trend, in combination with “Afghanistan fatigue”, is sapping NATO members’ willingness to persevere with current operations.

To compensate for these flagging budgets and backbones, NATO Headquarters in Brussels has adopted a buzzword inspired by the New Strategic Concept: “smart defense.” This appears to mean doing more with less by pooling resources and sharing capabilities. No one should doubt that the allies could operate a lot smarter than they have, but “smart power” may end up being little more than a pretty mask covering an ugly face. At Lisbon NATO recommitted itself to strengthening existing partnerships, reaching out to Russia, China and India, and better resourcing the ISAF mission in Afghanistan. But buzzwords alone can’t provide the fundamentals NATO is missing. . . .

At a time of Russian resurgence, the ongoing reorientation of U.S. policy toward Asia and the fracturing within the alliance itself, Europe’s old reflex is to look to Washington for leadership. In Washington, however, no such leadership is on offer. The days when Washington led from out in front are likely behind us. Left to their own devices, the Europeans cannot replace the traditional American role with one of their own making. And so Europe continues both to criticize Washington and to long for its direction. We have come to the point that NATO has been reduced to something like the Transatlantic family’s used, somewhat beat-up second car. Everyone admits that we still need it, but no one wants to be the family member stuck driving it.  (photo: AP)  (via Small Wars Journal)