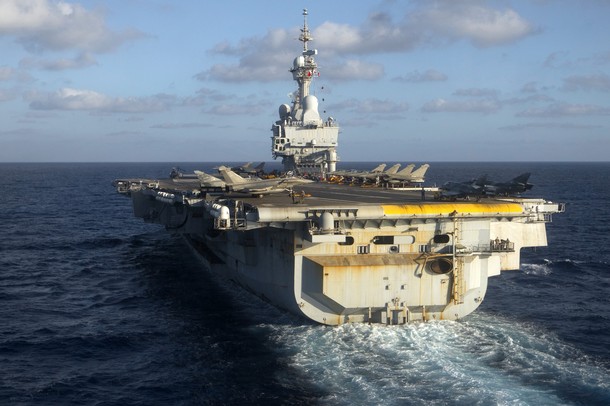 From David Brunnstrom, Reuters:  Worse looms over the horizon, with France indicating it will need in the autumn to withdraw the Libyan mission’s only aircraft carrier, the Charles de Gaulle, on virtually continuous operations since last year — with no replacement in the offing.

"The elephant in the room is the imminent departure of the French carrier, given it has been flying 30-40 percent of all NATO strike sorties," said Tim Ripley, of Jane’s Defense Weekly.

"It’s a looming problem, so sustaining this operation, particularly if it’s going to grind past September or October, is going to be a problem."

In the absence of other allies coming forward with strike aircraft that could be flown from land bases — which would necessitate a fleet of refueling tankers only the United States could provide — one radical solution would be for Britain to redeploy decommissioned Harrier aircraft to its carrier HMS Illustrious, which was designated for conversion into a helicopter ship in Britain’s defense review.

However, even if such a tricky political decision were taken by British Prime Minister David Cameron, it would be up to four months before the ship was ready for action, Ripley said.

A senior NATO commander conceded the extent of the worry on Tuesday. French General Stephane Abrial said the Libyan crisis had come as "a surprise" and if it were to last a long time "the resources issue will become critical."  (photo: Getty)