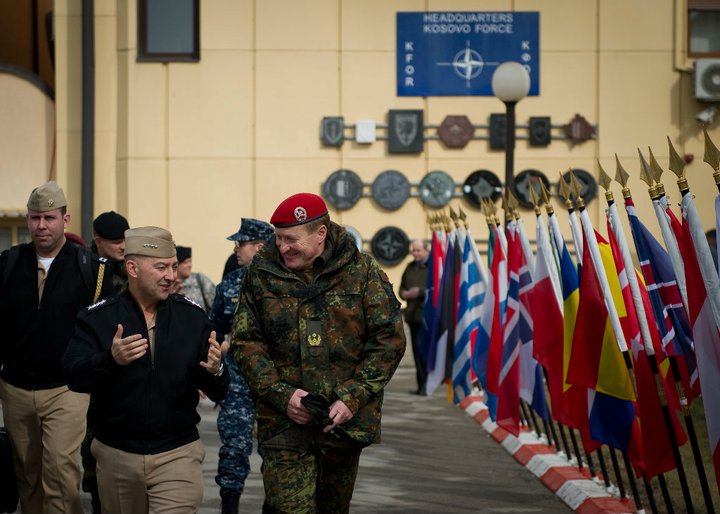 The SACEUR was met by Major General Erhard Buhler, Commander, KFOR, who escorted Admiral Stavridis to the KFOR headquarters. After a short office call, MG Buhler and his staff presented the SACEUR and his official party an in-depth overview of current operations and the progress of the drawdown of forces.

KFOR is in the deliberate process of reducing forces and reorganizing command structure as they move to a deterrent posture also known as "GATE 2”. Currently the drawdown is on schedule and it is projected that the reduction in troops from approximately nine thousand troops in 2010 to five thousand will be complete by the end of March. The reduction in forces is one that reflects the growing capability and capacity of local institutions to assume responsibility for civil and security tasks. Admiral Stavridis complimented the professionalism and dedication of KFOR forces and is proud of the progress that has been accomplished in Kosovo, where less than 12 years ago, thousands were being killed, millions of people were displaced, and it was the epicentre of world attention focused on the bloody conflict.

Admiral Stavridis also met with Mr. Xavier Bout De Marnhac, Head of Mission, European Union Rule of Law Mission Kosovo (EULEX )(CCK1), to discuss ongoing EULEX efforts in Kosovo. EULEX is a civilian mission launched from under the European Security and Defence Policy, and its mission is to assist and support the Institutions in Kosovo (Iik), by monitoring, mentoring and advising on all areas related to the rule of law.  (photo: MSGT Edouard Bocquet/French Air Force)