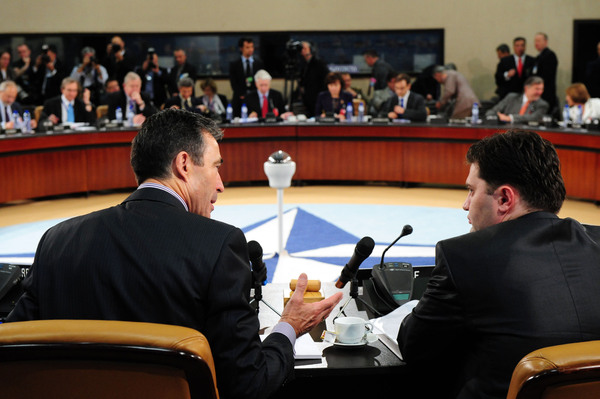 From Anders Fogh Rasmussen, NATO:  This bridge across Europe, between NATO and Russia, makes Europe more stable and more secure. Yes, we disagree every once in a while, and fundamentally on some issues, such as over Georgia. But we have learned not to let that overshadow the importance and the potential of this relationship, to make us all safer. …

Now, I can imagine a few of you thinking: nice image, but a little bit rosy. What about the areas where NATO countries and Russia disagree? For example, what about Georgia?

And I fully share those concerns. There will certainly be issues on which we simply can’t agree. The massive numbers of Russian forces in Georgia, against the will of the Government, is one of those. So is the recent Russian decision to move missiles into Georgia, which we believe to be a dangerous move that is clearly in violation of the ceasefire agreement between Presidents Medvedev and Sarkozy. The recognition by Russia of the so-called independence of the Georgian territories of Abkhazia and South Ossetia is also unacceptable to NATO Allies. So as you can see, over Georgia – and by the way, also over the continued presence of Russian military assets in Moldova – we cannot see eye to eye.

But we cannot let this paralyze everything. It is counterproductive for everyone. We must and will continue to stand on the point of principle of host-nation consent – which, as I mentioned, is part of the CFE package. Here too, there is potential for positive reinforcement.

If conventional arms control in Europe is to move forward, it can only do so if host-nation consent is respected. That’s fundamental. And it applies to Georgia as much as to any other country. There is no way around it. Which is why I think that the shared desire to see progress on CFE can help energise efforts to unfreeze the deadlock over Georgia, in a way that fully respects host-nation consent and Georgia’s territorial integrity and sovereignty.