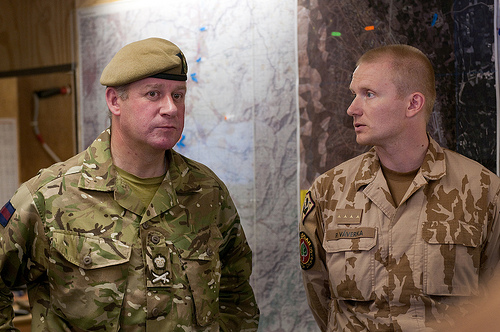 General Bucknall has been serving as the Deputy Commander of the International Security Assistance Force (ISAF) since September 2010 and could remain in this post until January 2012. The ARRC is currently providing 250 officers and soldiers to augment the ISAF Joint Command (IJC) headquarters in Kabul throughout 2011. …

Lieutenant General James Bucknall was born in 1958 and educated at Winchester. He enlisted in the Army in 1977 and was commissioned into the Coldstream Guards in 1978. His early service was with the 2nd Battalion and included postings in Great Britain, Northern Ireland, Germany and Cyprus. After Staff College in 1990 and Company Command, he served on the operations staff in Headquarters Northern Ireland. He commanded 1st Battalion Coldstream Guards in the armoured infantry role in Germany before being appointed Chief of Staff, 1st (UK) Armoured Division in 1998, initially deployed in Bosnia as Multi-National Division (South West).

Following the Higher Command and Staff Course in 2001, he commanded 39 Infantry Brigade with operational responsibility for the Greater Belfast Region. In 2004 he was appointed Director Counter-Terrorism and UK Operations in the Ministry of Defence before deploying in 2006 to Baghdad on the strategic planning staff in Headquarters Multi-National Force Iraq. On completion, he was appointed Chief of Staff, Allied Rapid Reaction Corps, serving initially with the Headquarters in Afghanistan as Chief of Staff ISAF IX in 2006/7. He served as Assistant Chief of the General Staff 2009-2010, and will return to Afghanistan as DCOM ISAF in September.  (photo: CPO  Joshua Treadwell/ISAFMedia)