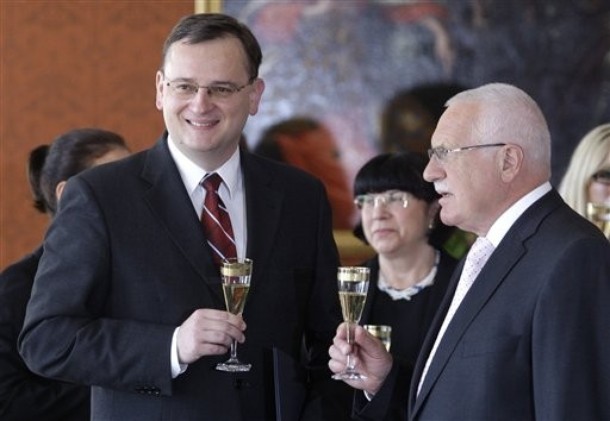 From Dan Bilefsky, the New York Times:  President Vaclav Klaus of the Czech Republic said Sunday he would appoint a center-right leader, Petr Necas, as the country’s new prime minister on Monday, clearing the way for a government that is both pro-American and focused on fiscal austerity.

The appointment of Mr. Necas, whose Civic Democratic Party is in coalition talks with two new rightist parties — the conservative TOP 09 and the rightist Public Affairs — will help bring an end to a drawn-out period of instability in Czech politics. The country has been run by a caretaker government since a coalition led by the Civic Democrats lost a vote of no confidence in March 2009.

Mr. Necas, 45, who previously served as a social affairs minister, has vowed to slash a budget deficit that stands at about 5.9 percent of the country’s gross domestic product. He has said he wants coalition talks to conclude by early July so the new government can push through a belt-tightening budget for 2011. …

Political analysts described Mr. Necas as a hard-working pragmatist, with free-market instincts and a keen commitment to the European Union and NATO. The new government is expected to seek close ties with the Obama administration and to fulfill the previous government’s pledge to host elements of a reformulated American missile defense system.  (photo: AP)