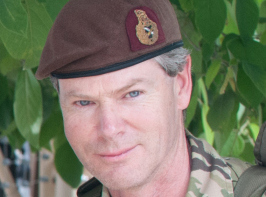 A ceremony welcoming General Bradshaw and honouring the service of General Shirreff was presided over by SHAPE Chief of Staff General Werner Freers on 28 March 2014.

“On behalf of all members of Allied Command Operations, it is my honour to welcome you to SHAPE and to offer sincere congratulations on this prestigious appointment,” said General Freers. “You are assuming the position of DSACEUR at an important time for NATO, and I am certain the Alliance will benefit greatly from your leadership, insight, and considerable military experience,” he said.

General Bradshaw is a British Army Officer who previously was the deputy commander of ISAF and recently commanded the Land Forces of the United Kingdom.

“Sir Richard developed truly comprehensive relationships between NATO and the European Union, and has personally reached out to international and non-governmental organizations on behalf of the Alliance, said General Freers. “His friendship and wise council will be sorely missed by NATO,” he added.

General Shirreff has served in the capacity of DSACEUR from March 2011 to March 2014. His wife, Lady Sarah-Jane Shirreff was very active in the SHAPE community.

“We have loved our time in Mons and are proud to be Shapians,” said General Shirreff. “My wife and I will always remember with great fondness our time in this most enriching and vibrant of communities, and we wish you all every success for the future,” he said.

General Shirreff is retiring from military service and he and his wife will reside in the United Kingdom.

The DSACEUR’s primary responsibility is to act as the deputy for the Supreme Allied Commander Europe (SACEUR). Two major focus areas for the DSACEUR include the generation of forces for operational missions and the coordination of interaction between NATO and the European Union.