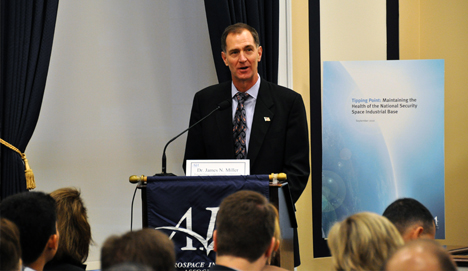 From Bill Gertz, Inside the Ring:  Undersecretary of State Ellen Tauscher, who has been leading U.S.-Russian missile defense talks that are largely kept secret from Congress and the public, was given a demotion of sorts , Inside the Ring was told by a senior U.S. national security official.

Mrs. Tauscher, a former Democratic congresswoman from California, has annoyed colleagues and critics with her abrasive style. In meetings, she has been known to refer to herself as "the Tausch."

Word from the Pentagon is that Mrs. Tauscher is no longer the lead Obama administration official for the U.S.-Russian talks on missile defenses, which the administration has been holding with Moscow and working toward what critics on Capitol Hill have said is the questionable goal of concluding a technology-sharing agreement with Russia.

Instead, the Pentagon’s Jim Miller, principal deputy undersecretary of defense for policy, is now the key negotiator, even though Mrs. Tauscher technically will be in charge overall.

An aide to Mrs. Tauscher said Inside the Ring is "misinformed" about her position in the talks.

The Miller-led group met last month and issued a vague statement April 11 that said the two sides "discussed various military policy and technical aspects of potential cooperation in the field of missile defense in Europe."