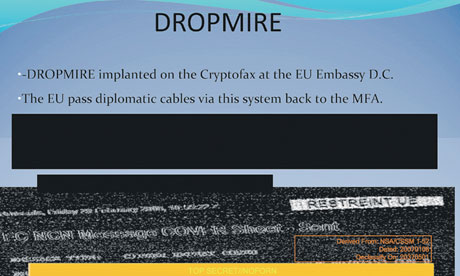 From Ewen MacAskill and Julian Borger, Guardian:  US intelligence services are spying on the European Union mission in New York and its embassy in Washington, according to the latest top secret US National Security Agency documents leaked by the whistleblower Edward Snowden.

One document lists 38 embassies and missions, describing them as "targets". It details an extraordinary range of spying methods used against each target, from bugs implanted in electronic communications gear to taps into cables to the collection of transmissions with specialised antennae.

Along with traditional ideological adversaries and sensitive Middle Eastern countries, the list of targets includes the EU missions and the French, Italian and Greek embassies, as well as a number of other American allies, including Japan, Mexico, South Korea, India and Turkey. The list in the September 2010 document does not mention the UK, Germany or other western European states.

One of the bugging methods mentioned is codenamed Dropmire, which, according to a 2007 document, is "implanted on the Cryptofax at the EU embassy, DC" – an apparent reference to a bug placed in a commercially available encrypted fax machine used at the mission. The NSA documents note the machine is used to send cables back to foreign affairs ministries in European capitals.

The documents suggest the aim of the bugging exercise against the EU embassy in central Washington is to gather inside knowledge of policy disagreements on global issues and other rifts between member states. . . .

The US intelligence service codename for the bugging operation targeting the EU mission at the United Nations is "Perdido". Among the documents leaked by Snowden is a floor plan of the mission in midtown Manhattan. The methods used against the mission include the collection of data transmitted by implants, or bugs, placed inside electronic devices, and another covert operation that appears to provide a copy of everything on a targeted computer’s hard drive.

The eavesdropping on the EU delegation to the US, on K Street in Washington, involved three different operations targeted on the embassy’s 90 staff. Two were electronic implants and one involved the use of antennas to collect transmissions.  (photo: Guardian)