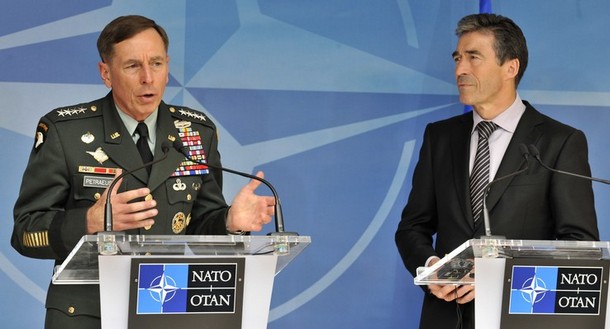 From Thom Shanker, the New York Times:  Gen. David H. Petraeus, the top commander in Afghanistan, has completed work on new guidelines for turning some security duties over to Afghan forces in the months ahead , calling for American and allied troops to step back gradually from areas as they are pacified rather than handing off the task all at once to local units, according to senior NATO and Pentagon officials.

The guidelines envision that while some troops would leave the country when their current areas were secured, others could be reassigned new missions within Afghanistan, giving General Petraeus flexibility in troop deployments as he confronts pressure from some allies and some Democrats in Washington to begin winding down the war next year.

The emphasis in his plan would be on shifting troops to train Afghan security forces to accelerate the pace at which local police officers and soldiers could successfully take over, allowing even more of the alliance force to depart. But some remaining foreign troops could move into areas near their current operations where militants remain active. …

Pentagon and administration officials acknowledged that the guidelines drawn up by General Petraeus and his staff at their Kabul headquarters — in particular a goal of redeploying troops pulled from contested areas to other tasks — might clash with timetables set by some NATO nations to begin pulling troops from Afghanistan.

But a range of military and administration officials, who discussed the planning on the condition of anonymity, said that the guidelines developed by General Petraeus did not represent a shift in the Obama administration’s strategy for Afghanistan, and that they had the Defense Department’s strong backing. …

With the broad guidelines complete, General Petraeus and his team now are turning to the task of writing specific projections for security transition by time and region in 2011. Those projections will be completed for a NATO meeting in Lisbon in November.

In support of General Petraeus’s new guidelines, the White House, Pentagon and State Department leadership plan to continue lobbying NATO partners to take on more of the politically palatable training mission, even if they are pressured by their populations to end their combat role, officials said.

The administration’s strategy in the coming months will aim to explain to the population in NATO countries that, while the war in Afghanistan has been going on for nearly nine years, the current counterinsurgency strategy began only in the first year of the Obama administration — and that a full complement of forces has only arrived late this summer.  (photo: Getty)