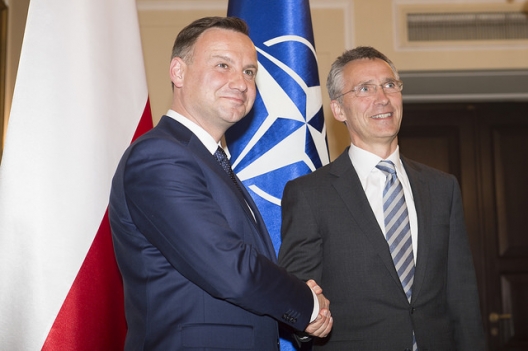 From Guardian:  The Conservative politician Andrzej Duda has been sworn in as Poland’s new president, immediately calling for a stronger Nato presence in his country to counter a perceived military threat from Russia. …

As supreme commander of Poland’s armed forces, he said he was especially concerned about the nation’s security in the face of a resurgent Russia. “We need a greater presence of Nato in this part of Europe,” Duda said.

He vowed to press for more Nato security guarantees at the group’s summit in Warsaw next year. He called his programme Newport Plus, in reference to a summit in Wales last year that decided on a rapid reaction force in the region, which is still being formed. Duda insisted that was not enough.

From AP:  Poland’s president-elect, who takes office on Thursday, says he wants to see NATO bases in Poland and will talk to European Union partners about including Poland in Ukraine peace talks.Andrzej Duda, previously a member of the conservative opposition Law and Justice party, says the ruling Civic Platform hasn’t done enough to increase Poland’s security and strengthen its international position. He vowed “corrections” in foreign policy, “sometimes deep ones.”

Duda said in an interview with the PAP agency Wednesday that he wants next year’s NATO summit in Warsaw to reinforce the alliance’s presence in Poland and across a region that feels threatened by a resurgent Russia. He said he will raise the issue with Germany, which has previously blocked efforts to place NATO troops in central and eastern Europe, saying it might strain relations with Russia.

From Derek Scally, Irish Times:  As head of the Polish armed forces, Mr Duda promised he would be a more demanding partner of Nato in the coming years.

“We need more guarantees from Nato, not only we as Poland, but the whole of central and eastern Europe in the current difficult geopolitical situation,” he said.