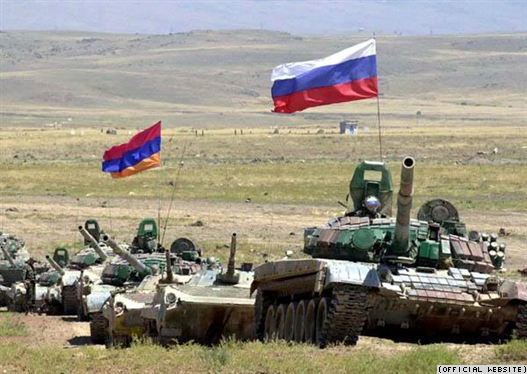 From Radio Free Europe/Radio Liberty:  A diplomatic source told RFE/RL’s Armenian Service that the Russian and Armenian governments have finalized a far-reaching agreement that will prolong and upgrade Russia’s military presence in Armenia.

The source in Yerevan told RFE/RL on August 13 that the two governments have worked out corresponding amendments to a 1995 treaty regulating a Russian military base in the country.

He said the amendments are likely to be signed during Russian President Dmitry Medvedev‘s visit to Armenia, which starts on August 19.

The amendments will reportedly extend Russia’s basing rights by 24 years, to 2044, and upgrade the mission of its troops headquartered in the city of Gyumri.

Interfax reported on July 30 that a relevant "protocol" submitted to Medvedev by the Russian government makes clear that the troops will have not only "functions stemming from the interests of the Russian Federation," but also "protect Armenia’s security together with Armenian Army units."

It also commits Russia to supplying its regional ally with "modern and compatible weaponry and special military hardware."  (photo: RFE/RL )