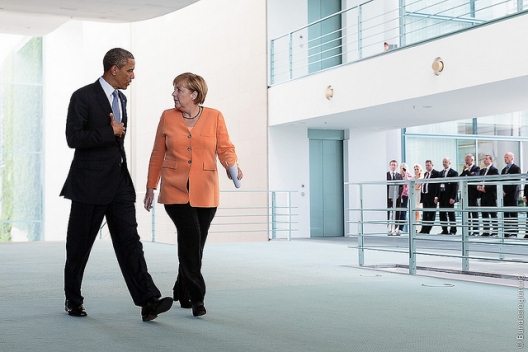 Seven decades after the end of World War II and a quarter-century after the end of the Cold War, roughly seven-in-ten Americans see Germany as a reliable ally, and about six-in-ten Germans trust the United States, according to a Pew Research Center survey. A majority of Germans believe it is more important for Germany to have strong ties with the United States than with Russia. Germans also give U.S. President Barack Obama high marks for his management of the U.S.-German relationship. And Germans and Americans are equally wary of international entanglements and want their countries to focus on domestic problems.

But Germans and Americans do not see eye-to-eye on salient points in the history of the postwar alliance, nor about some of the key issues in its future. For Americans, the most important event in U.S.-German relations over the past 75 years remains World War II and the Holocaust. Germans are less unanimous in their views of historical importance, but to the extent that one event stands out it is the 1989 fall of the Berlin Wall. In the eyes of most Americans, the “special relationship” with Britain is still stronger than that with Germany. Americans want Germany to play a more active military role in the world, but Germans emphatically disagree. Americans think that neither the European Union nor the U.S. is being tough enough in dealing with Russia on the issue of Ukraine. A plurality of Germans believes the handling of Russia is about right. And, while half of Americans voice the view that a free trade agreement between the EU and the U.S. would be a good thing, only about four-in-ten Germans agree.

These are among the main findings of Pew Research Center surveys conducted in the U.S. among 1,003 people from February 26 to March 1, 2015, and in Germany among 963 people February 24-25, 2015. All interviews were done by telephone. The survey was conducted in association with the Bertelsmann Foundation.