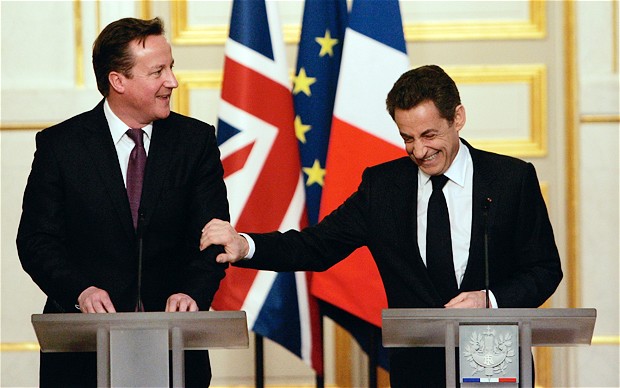 From Rowena Mason, the Telegraph:  David Cameron was right to “defend Britain’s national interest” when he vetoed the new European treaty, Nicolas Sarkozy, the French president, has admitted.

Drawing a line under months of bitter clashes over the future of Europe, Mr Sarkozy said he might have done the same if his country was threatened in a similar way.

“We have had divergences of views but perhaps had I been in David Cameron’s position I would have defended British interests in exactly the same manner as he has,” Mr Sarkozy said. “There has never been a personal opposition between us.”

The two leaders acknowledged they recently had a strained relationship, after Mr Cameron refused to let Britain bind its finances closer to other European countries in the treaty. It was reported that Mr Sarkozy had called the Prime Minister an “obstinate kid” over Britain’s refusal to share taxation and spending policy with the rest of Europe. However both leaders were yesterday anxious to underline they are “friends” as well as colleagues and have got to know each other better since their disputes.

Mr Sarkozy said he now understood where Britain’s “red lines” lie when it comes to being part of Europe. He even said he “admired” Britain’s staunch defence of the City.  (photo: Getty)