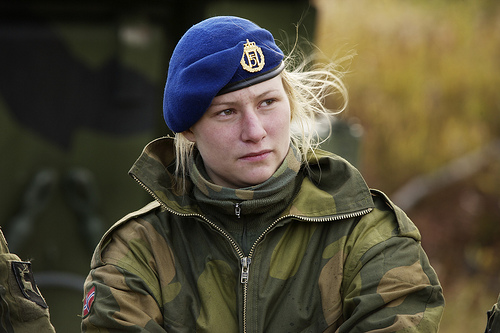 From Ellen Emmerentze Jervell, Wall Street Journal:  Saying it has the highest per capita defense budget in Europe, Norway aims to double the number of women as a percentage of personnel in its armed forces by the end of the decade , in an attempt to lay a template for other nations on the issue of equality in the military.

The small Scandinavian nation said it would be the first nation in NATO to draft females into military service after decades of confining its conscription activities to men. Women have been able for some time to enlist in the country’s armed forces. The move on conscription comes as other nations, including neighboring Sweden, ditch conscription altogether.

"We are sending a signal that, once again, Norway’s thinking ahead when it comes to equality," Norway’s foreign minister, Espen Barth Eide said in an interview Sunday, two days after the parliament voted overwhelmingly in favor of a new law mandating the drafting of women. About 10% of Norway’s military is currently female, but the goal is to take the number to 20% by 2020.

Even with mandatory service extending to women, the shift is likely to affect only a small portion of the nation’s female population unless Norway finds itself in a serious military conflict. The nation’s military is modest. There are around 24,000 people serving in the military.

There currently is a pool of about 60,000 people in Norway eligible for the draft. But only 9,000 are conscripted for the mandatory one-year term of service. The remaining 15,000 personnel are either considered military employees or civilian staff.

Women serve in combat roles in Norway’s military and the country has a contingent serving in Afghanistan.  (photo: Norway’s Ministry of Defense)