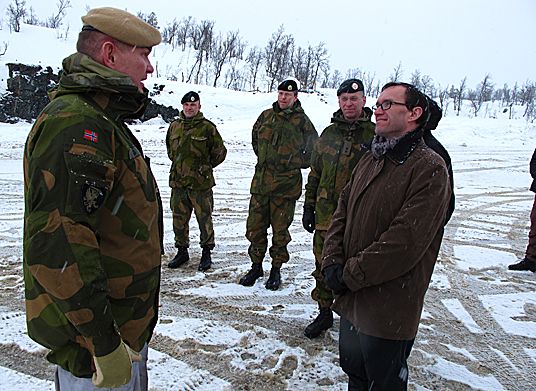 From Trude Peterson, the Barents Observer:  A year after Russia informed that it will establish military units specially trained for operations in the Arctic, Norway announces plans to reequip one of its units to an ‘Arctic Battalion’.

The ‘Arctic battalion’ is not going to be created from scratch, it is more of a renaming of an already existing unit – the 2nd Battalion at camp Skjold in Troms county. This battalion is a mechanized infantry unit in Brigade Nord, Norway’s only army brigade. . . .

The ‘Arctic battalion’ will be equipped with snowmobiles, ATVs and other light vehicles to be able to move and operate quickly and easily. The battalion will consist of conscripts and enlisted personnel.

In March 2011 Russia announced that the 200. motorized infantry brigade in Pechenga, some 10 kilometers from the Russian-Norwegian border, would be reorganized as an Arctic brigade. The original plan was to have the unit ready by the end of 2011, but in February this year, Commander of the Russian Ground Forces Col.Gen. Alexander Postnikov said that the first brigade will be established in 2015, when Russia receives new vehicles designed for operations in the Arctic, BarentsObserver reported.  (photo: Norway’s Ministry of Defense)  (via @Becca_Pincus)