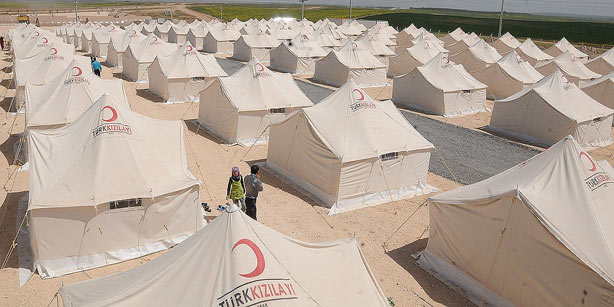 From Today’s Zaman:  The number of Syrian refugees in Turkey has now exceeded 100,000, a level that Turkey said could trigger actions such as the creation of a buffer zone because it would struggle to accommodate more than 100,000 refugees.

In a statement on Monday, the Prime Ministry’s Disaster and Emergency Management Directorate (AFAD) announced that there were now 100,363 Syrians at 13 camps built in seven Turkish provinces along the border with Syria.

Foreign Minister Ahmet Davutoğlu said in August that Turkey would not accept more than 100,000 refugees and that the creation of a buffer zone could be necessary to contain the refugee flow onto its soil.

Turkish officials describe the number as a “psychological threshold,” which does not automatically trigger measures for the creation of a buffer zone, emphasizing also the importance of international support for such a move.

Speaking to Today’s Zaman, an official said the issue was not on Turkey’s immediate agenda just because the number of refugees has hit 100,000, but added that this remains an option. More than 10,000 Syrians are already waiting on the other side of the border and there are fears that an army offensive in Aleppo, where clashes between the army forces and the opposition have been raging, could spark a new wave of refugees headed towards the Turkish border. . . .

On Saturday, Foreign Minister Davutoğlu said Turkey will retaliate without hesitation if its border with Syria is violated again and if it believes that its national security is in danger. "When it comes to security, Turkey’s border is equal to the Norwegian border as far as NATO is concerned. The security of these borders is the security of NATO. So we believe that this solidarity will continue,” Davutoğlu said.  (photo: Cihan)