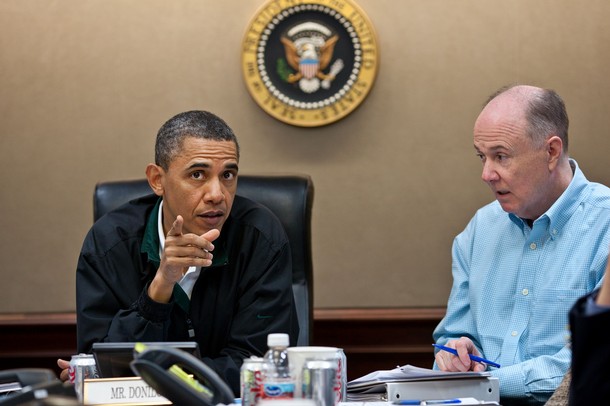 From David Sanger, Eric Schmitt and Thom Shanker, the New York Times:  President Obama’s national security team is contemplating troop reductions in Afghanistan that would be steeper than those discussed even a few weeks ago , with some officials arguing that such a change is justified by the rising cost of the war and the death of Osama bin Laden, which they called new “strategic considerations.”

These new considerations, along with a desire to find new ways to press the Afghan president, Hamid Karzai, to get more of his forces to take the lead, are combining to create a counterweight to an approach favored by the departing secretary of defense, Robert M. Gates, and top military commanders in the field. They want gradual cuts that would keep American forces at a much higher combat strength well into next year, senior administration officials said. . . .

At one end of the debate is Vice President Joseph R. Biden Jr. and, presumably, a range of Mr. Obama’s political advisers, who opposed the surge in 2009 and want a rapid exit, keeping in place a force focused on counterterrorism and training.

At the other end is Mr. Gates, who leaves office at the end of the month and who won the 2009 debate over the troop surge along with Secretary of State Hillary Rodham Clinton and senior commanders on the ground.

It is not clear what Mrs. Clinton’s position is now as the internal debate is rejoined, and Mr. Obama’s team has changed considerably in the past 18 months. Thomas E. Donilon, appointed national security adviser last fall, was leery of the surge and is likely to lean toward a speedier withdrawal, colleagues say.

Leon E. Panetta, the director of the Central Intelligence Agency, supports greater use of unmanned drone technology and will have a voice as Mr. Gates’s nominated successor. General Petraeus is leaving his post in Afghanistan shortly to head the C.I.A., assuming he is confirmed by the Senate this summer. (photo: White House/Getty)