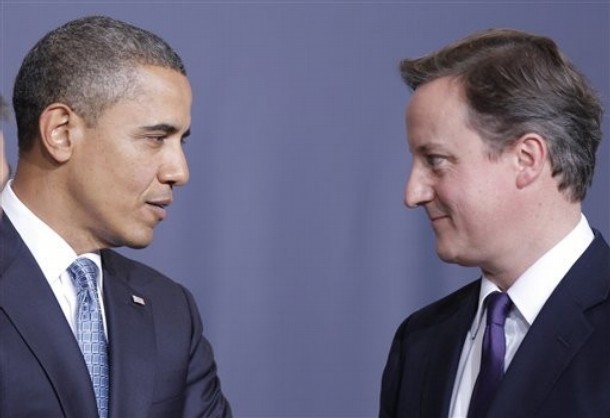 From the White House:  President Obama spoke with British Prime Minister David Cameron today [4/20] as part of his ongoing consultations with coalition allies and partners on Libya.   The President and Prime Minister agreed that United Nations Security Council resolutions on Libya must be fully implemented. In addition to increasing military pressure and protecting civilians through the coalition operation that NATO is leading, the leaders discussed the importance of increasing diplomatic and economic pressure on the Qadhafi regime to cease attacks on civilians and comply with UN Security Council resolutions. The two leaders noted the international consensus achieved at last week’s Contact Group meeting in Doha and the NATO Foreign Ministerial in Berlin, both of which emphasized the need for Qadhafi to leave power.

Readout of the President’s call with British Prime Minister Cameron.

From Tabassum Zakarai, Reuters:  The United States is moving to provide Libyan rebels with $25 million in medical supplies, radios and other aid that would not include weapons, Secretary of State Hillary Clinton said on Wednesday. . . .

"We are moving to authorize up to $25 million in non-lethal commodities and services to support the Transitional National Council and our efforts to protect civilians and the civilian populated areas that are under the threat of attack," Clinton told a news conference. . . .