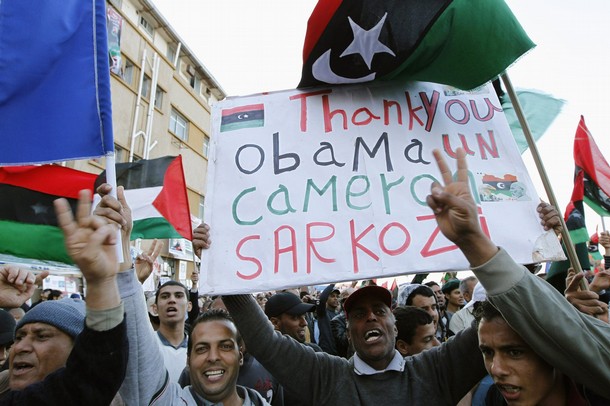 From Barack Obama, David Cameron, and Nicolas Sarkozy, the International Herald Tribune:  Together with our NATO allies and coalition partners, the United States, France and Britain have been united from the start in responding to the crisis in Libya, and we are united on what needs to happen in order to end it. …

Our duty and our mandate under U.N. Security Council Resolution 1973 is to protect civilians, and we are doing that. It is not to remove Qaddafi by force. But it is impossible to imagine a future for Libya with Qaddafi in power. The International Criminal Court is rightly investigating the crimes committed against civilians and the grievous violations of international law. It is unthinkable that someone who has tried to massacre his own people can play a part in their future government. The brave citizens of those towns that have held out against forces that have been mercilessly targeting them would face a fearful vengeance if the world accepted such an arrangement. It would be an unconscionable betrayal.

Furthermore, it would condemn Libya to being not only a pariah state, but a failed state too. Qaddafi has promised to carry out terrorist attacks against civilian ships and airliners. And because he has lost the consent of his people any deal that leaves him in power would lead to further chaos and lawlessness. …

There is a pathway to peace that promises new hope for the people of Libya — a future without Qaddafi that preserves Libya’s integrity and sovereignty, and restores her economy and the prosperity and security of her people. This needs to begin with a genuine end to violence, marked by deeds not words. The regime has to pull back from the cities it is besieging, including Ajdabiya, Misurata and Zintan, and return to their barracks. However, so long as Qaddafi is in power, NATO must maintain its operations so that civilians remain protected and the pressure on the regime builds. Then a genuine transition from dictatorship to an inclusive constitutional process can really begin, led by a new generation of leaders. In order for that transition to succeed, Qaddafi must go and go for good.

Britain, France and the United States will not rest until the United Nations Security Council resolutions have been implemented and the Libyan people can choose their own future.

Barack Obama is the 44th president of the United States.David Cameron is prime minister of Britain and Nicolas Sarkozy is president of France.  (photo: Reuters)