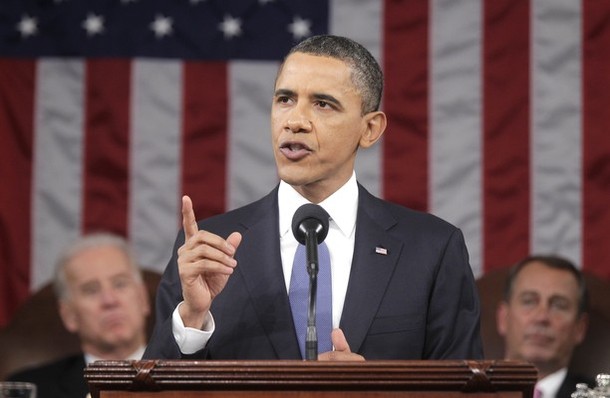 From the White House:  Look to Iraq, where nearly 100,000 of our brave men and women have left with their heads held high.   American combat patrols have ended, violence is down, and a new government has been formed.  This year, our civilians will forge a lasting partnership with the Iraqi people, while we finish the job of bringing our troops out of Iraq.  America’s commitment has been kept.  The Iraq war is coming to an end.

Of course, as we speak, al Qaeda and their affiliates continue to plan attacks against us.  Thanks to our intelligence and law enforcement professionals, we’re disrupting plots and securing our cities and skies.  And as extremists try to inspire acts of violence within our borders, we are responding with the strength of our communities, with respect for the rule of law, and with the conviction that American Muslims are a part of our American family.

We’ve also taken the fight to al Qaeda and their allies abroad.  In Afghanistan, our troops have taken Taliban strongholds and trained Afghan security forces.  Our purpose is clear:  By preventing the Taliban from reestablishing a stranglehold over the Afghan people, we will deny al Qaeda the safe haven that served as a launching pad for 9/11.

Thanks to our heroic troops and civilians, fewer Afghans are under the control of the insurgency.  There will be tough fighting ahead, and the Afghan government will need to deliver better governance.  But we are strengthening the capacity of the Afghan people and building an enduring partnership with them.  This year, we will work with nearly 50 countries to begin a transition to an Afghan lead.  And this July, we will begin to bring our troops home.

In Pakistan, al Qaeda’s leadership is under more pressure than at any point since 2001.  Their leaders and operatives are being removed from the battlefield.  Their safe havens are shrinking.  And we’ve sent a message from the Afghan border to the Arabian Peninsula to all parts of the globe:  We will not relent, we will not waver, and we will defeat you.

American leadership can also be seen in the effort to secure the worst weapons of war.  Because Republicans and Democrats approved the New START treaty, far fewer nuclear weapons and launchers will be deployed.  Because we rallied the world, nuclear materials are being locked down on every continent so they never fall into the hands of terrorists. …

This is just a part of how we’re shaping a world that favors peace and prosperity.  With our European allies, we revitalized NATO and increased our cooperation on everything from counterterrorism to missile defense.  We’ve reset our relationship with Russia, strengthened Asian alliances, built new partnerships with nations like India.