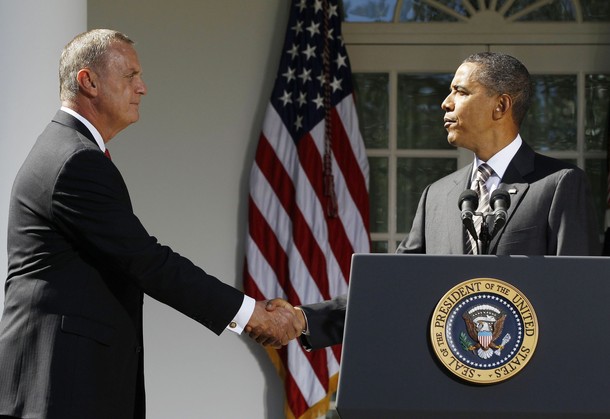 From Barack Obama, the White House:  When I talked to Jim about taking this job shortly after the election, it was a difficult decision for him.   He had just retired from the military, had a wide range of family obligations.  But because of his patriotism, his dedication to keeping America safe, we were able to agree that he would serve, but he asked that we would — he would serve for about two years.  I am extraordinarily thankful that both he and his wife Diane agreed to make that additional sacrifice for our country.

Today, as we approach that two-year mark, I’m announcing that Jim has decided to step aside as National Security Advisor later this month, and that he will be succeeded by his very capable deputy, Tom Donilon.

The American people owe Jim an unbelievable debt of gratitude for a lifetime of service.  As a Marine in Vietnam, he risked his life for our country and was highly decorated for his courage.  As Commandant of the Marine Corps, he led our Marines into the 21st century and won widespread admiration within the Corps and beyond.  As Supreme Allied Commander in Europe, he helped the NATO alliance prepare for the new missions of our time.  And given the multiple crises that we inherited, Jim has drawn on all of these experiences as National Security Advisor. …

Through these challenges, Jim has always been a steady voice in Situation Room sessions, daily briefings, and with meetings with foreign leaders, while also representing our country abroad with allies and partners in every region of the world.  At the same time, he has led an unprecedented reform of our national security staff here at the White House.  Reflecting the new challenges of our time, he put new emphasis on cyber security, development and climate change, and made sure that homeland security is fully integrated into our efforts.

Serving as National Security Advisor is one of the most difficult jobs in our government.  But through it all, Jim —- like the Marine he has always been —- has been a dedicated public servant and a friend to me.  After a lifetime of service, I know this was also an enormous sacrifice for the Jones family.  Many of them are here today, and I want to thank them as well.  Jim, like your father and uncle and generations of Joneses who served before you, you complete this assignment knowing that your country is safer and stronger.  I thank you, and the American people thank you.