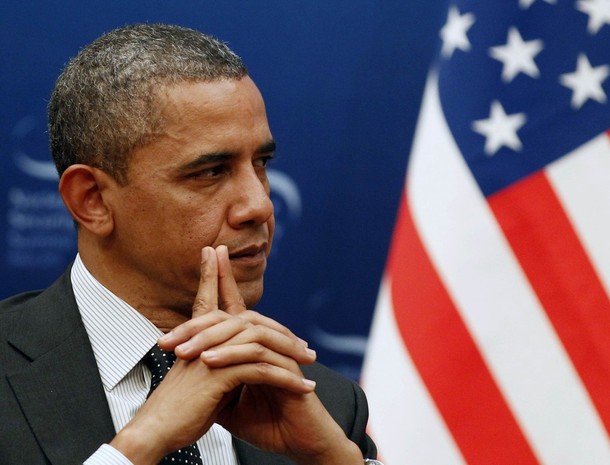 From Matt Spetalnick, Reuters:  U.S. President Barack Obama voiced doubt on Tuesday on the prospects for progress with Moscow on missile defense until after the November U.S. election as he staunchly defended remarks caught on camera the day before with Russian President Dmitry Medvedev.

Obama was overheard assuring Medvedev on Monday that he would have "more flexibility" to deal with contentious arms-control issues after the November 6 presidential ballot, drawing sharp criticism back home from his Republican foes.

Speaking on the sidelines of a global nuclear security summit in Seoul, Obama sought to put the controversy to rest but made clear that his earlier comments reflected a political reality that "everybody understands".

"I don’t think it’s any surprise that you can’t start that a few months before presidential and congressional elections in the United States and at a time when they just completed elections in Russia," Obama told reporters with Medvedev at his side. . . . .

In Monday’s talks, Obama urged Moscow to give him "space" until after the U.S. election and Medvedev said he would relay the message to incoming Russian president Vladimir Putin, who takes over at the Kremlin in May.

The unusual exchange came as Obama and Medvedev huddled together on the eve of the summit, unaware their words were being picked up by microphones as reporters were led into the room.

It was a rare public admission by a U.S. president on the world stage of electoral pressures he faced at home, and threatened to detract from his message at the summit on the need to do more to combat the threat of nuclear terrorism.

Obama, responding to a reporter’s question on Tuesday during a break in the summit, said progress on complex arms control issues required dealings with the Pentagon and Congress to build bipartisan support and that 2012 was not a good year to get that done.

"The current environment is not conducive to these kinds of thoughtful consultations," Obama said. "I think we’ll do better in 2013."  (photo: Reuters)