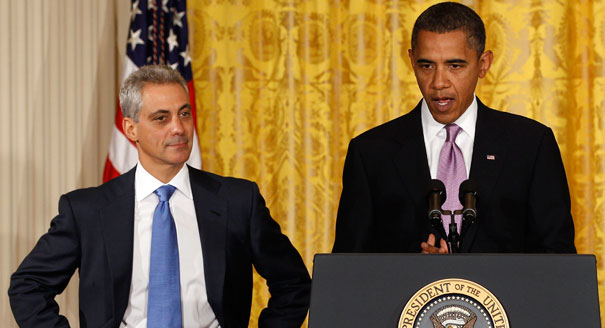 From Christi Parsons, the Chicago Tribune:  The G-8 economic summit will be held at Camp David, not in Chicago as had been scheduled.

The White House announced the surprise change in the following statement:

"In May, the United States looks forward to hosting the G-8 and NATO Summits. To facilitate a free-flowing discussion with our close G-8 partners, the president is inviting his fellow G-8 leaders to Camp David on May 18-19 for the G-8 Summit, which will address a broad range of economic, political and security issues.

"The president will then welcome NATO allies and partners to his hometown of Chicago for the NATO Summit on May 20-21, which will be the premier opportunity this year for the president to continue his efforts to strengthen NATO in order to ensure that the Atlantic Alliance remains the most successful  alliance in history, while charting the way forward in Afghanistan."

Mayor Rahm Emanuel had personally lobbied his old boss, President Barack Obama, to host both summits. It would have been the first time since 1977 in London that the two organizations held meetings in the same city at the same time.

Emanuel’s office put out a statement this afternoon saying he wished "President Obama and the other leaders well at the G8 meeting at Camp David and look forward to hosting the NATO Summit in Chicago.

"Hosting the NATO Summit is a tremendous opportunity to showcase Chicago to the world and the world to Chicago and we are proud to host the 50 heads of state, foreign and defense ministers from the NATO and ISAF countries in our great city May 19-21."

Chicago police estimated that 2,000 to 10,000 demonstrators were expected to show up for the overlapping G-8 and NATO summits.  At least two major demonstrations were already planned for downtown during the summit, and organizers said they wanted to send crowds of marchers down Michigan Avenue in the middle of the day. . . .

The head of a Chicago anti-war organization says the decision by the White House to move the G-8 summit is a major victory for protesters.

Joe Iosbaker is with the United National Antiwar Committee in Chicago and was helping to coordinate dozens of groups that planned to protest the twin NATO and G-8 summits in May.  He said the G-8 summit was moved because it had become a major source of controversy.

Iosbaker said the protests will go on during the NATO summit “because the agendas are the same: war and poverty.”

Some people involved in the planning of the summits in Chicago were stunned by the news and said they had no advanced warning of the change in plans.

Rick Jasculca, whose public relations firm has been advising World Business Chicago, the group Emanuel selected to lead the summit effort, said he learned of the change from breaking news announcements.   (photo: Reuters)