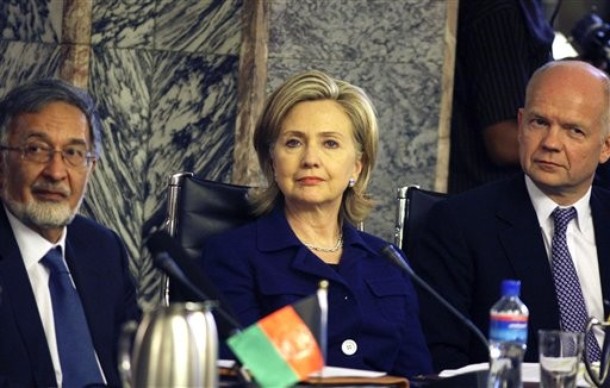 From David E. Sanger, the New York Times:  When President Obama announced a new strategy for Afghanistan in December, he argued that by setting a deadline of next summer to begin drawing down troops he would create a sense of urgency for the Afghan government to take the lead in the fight, while acknowledging the limits of America’s patience with the longest war in its history.

But over the past two weeks — on Capitol Hill, in Kabul and even in conversations with foreign leaders — Mr. Obama has been reminded how the goal has become what one senior American military commander called a “double-edged sword,” one that hangs over the White House as surely as it hangs over President Hamid Karzai.

The absence of serious progress this year has sown new doubts, here and abroad, that Mr. Obama will be able to reach even the scaled-down goals he set for America’s mission in the time he laid out in his speech at West Point seven months ago. The result is that the fierce debate over whether the war is worth the cost — a debate that Mr. Obama did not want to join until the Taliban suffered some losses — is unwinding one summer earlier than he had hoped. …

The allies, voicing similar concerns, have abandoned most talk of a conditions-based withdrawal in favor of harder timetables. Britain’s new prime minister, David Cameron, did his best to sound as though he and Mr. Obama were on the same page during his first visit to the White House on Tuesday, but he also told a BBC interviewer while in Washington, “We’re not going to be there in five years’ time.”

The Dutch leave this fall, and the Canadians say they intend to follow suit by the end of 2011.

As one of Mr. Obama’s top strategists said this week, with some understatement, “There are signs that the durability of this mission has to be attended to.”

All this has made it harder than ever for Mr. Obama to convince the Afghans and the Pakistanis that the West’s commitment is enduring. “Politically, the support is absolutely crumbling,” said David Gordon, a former top official on the National Intelligence Council and at the State Department who is now at the Eurasia Group. “You can’t hide that from the players in the region, and when they see it, it makes them hedge even more, preparing for the post-American era.”  (photo: AP)