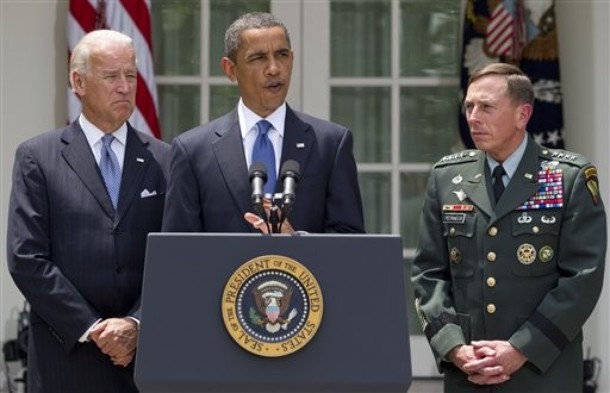 From Julie Pace, the AP:  President Barack Obama will announce the critical next steps in America’s decade-long war in Afghanistan on Wednesday, outlining both a plan to start bringing thousands of U.S. troops home next month and a broader withdrawal blueprint aimed at giving Afghans control of their own security in 2014. . . .

Obama is expected to make Wednesday’s announcement in Washington. On Thursday, he will visit troops at Fort Drum, the upstate New York military base that is home to the 10th Mountain Division, one of the most frequently deployed divisions to Afghanistan and Iraq.

While much of the attention is focused on how many troops will leave Afghanistan next month, the more telling aspects of Obama’s decision center on what happens after July, particularly how long the president plans to keep the 30,000 surge forces he sent in 2009 in the country.

There is a growing belief that the president must at least map out the initial withdrawal of the surge troops when he addresses the public. But whether those forces should come out over the next eight to 12 months or slowly trickle out over a longer time is hotly debated.

Military commanders want to keep as many of those forces in Afghanistan for as long as possible, arguing that too fast a withdrawal could undermine the fragile security gains in the fight against the Taliban insurgency in Afghanistan, the al-Qaida training ground for the Sept. 11 attacks. There are also concerns about pulling out a substantial number of U.S. forces as the heightened summer fighting season gets under way.

Retiring Defense Secretary Robert Gates has said he believes the initial drawdown should be "modest. . . ."

Obama has said the July withdrawal will be "significant," though aides haven’t quantified that. They do say Obama sees the initial drawdown in July as part of a larger strategy aimed at ending the U.S. combat mission in Afghanistan by the end of 2014 and turning security responsibility over to the Afghans. . . .

There are also indications that the administration, having learned from the U.S. experience in Iraq, will set deadline dates for the drawdown as it progresses, in order to keep pressure on the Afghans and give Congress mileposts.   (photo: AP)