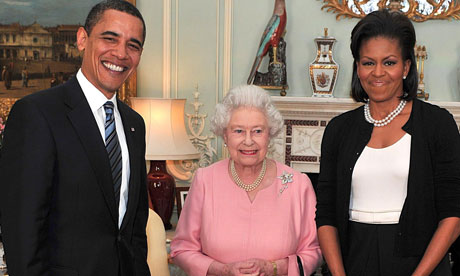 From Adrian Croft, Reuters:  President Barack Obama will make a state visit to Britain in May at the invitation of Queen Elizabeth, Buckingham Palace said on Thursday.

Obama will be accompanied by his wife, Michelle, on the May 24-26 visit when they will stay at Buckingham Palace, the queen’s residence in London.

The White House simultaneously confirmed the visit, which will be Obama’s first European state visit.

The trip was "a sign of the strength of the special relationship between our two countries and of the United States’ enduring commitment to its European and NATO allies and partners," White House spokesman Jay Carney said.  (photo: John Stillwell/AP)