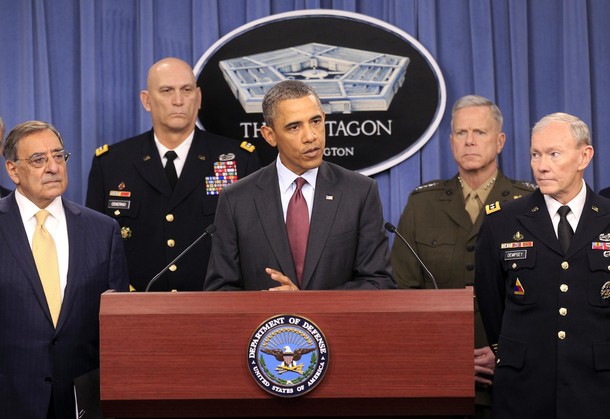 From Barack Obama, the White House:  The United States of America is the greatest force for freedom and security that the world has ever known.  And in no small measure, that’s because we’ve built the best-trained, best-led, best-equipped military in history — and as Commander-in-Chief, I’m going to keep it that way. . . .

[W]e have to renew our economic strength here at home, which is the foundation of our strength around the world.  And that includes putting our fiscal house in order.  To that end, the Budget Control Act passed by Congress last year — with the support of Republicans and Democrats alike — mandates reductions in federal spending, including defense spending.  I’ve insisted that we do that responsibly.  The security of our nation and the lives of our men and women in uniform depend on it.

That’s why I called for this comprehensive defense review — to clarify our strategic interests in a fast-changing world, and to guide our defense priorities and spending over the coming decade — because the size and the structure of our military and defense budgets have to be driven by a strategy, not the other way around.  Moreover, we have to remember the lessons of history.  We can’t afford to repeat the mistakes that have been made in the past — after World War II, after Vietnam — when our military was left ill prepared for the future.  As Commander in Chief, I will not let that happen again.  Not on my watch.

Excerpts from remarks by the President on the Defense Strategic Review.  (photo: Reuters)