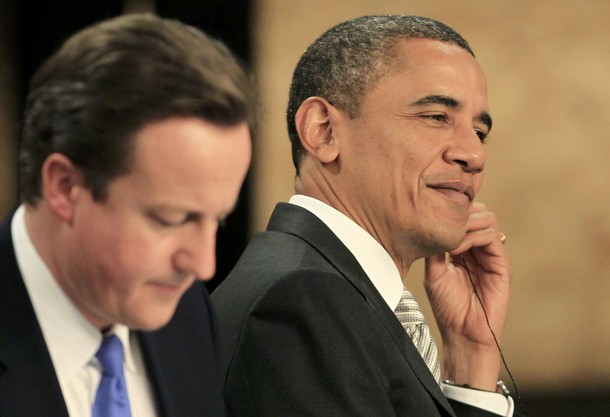 From Anthony Faiola, the Washington Post:  Obama arrives as Britain is attempting to balance financial constraints against a still ample desire for global influence — an influence bought in large part through its strategic and military alliance with the United States. Perhaps foreshadowing an election season debate in the United States about the cost of America’s own projections of power overseas, the British are wondering whether their deeply indebted nation can maintain its substantial international role. . . .

More important for the U.S. alliance, British Prime Minister David Cameron is pushing for tough cuts in military spending that critics say could jeopardize Britain’s role as a long-term, frontline partner in future conflicts. The plan includes putting this nation’s lone aircraft carrier into early retirement, slashing 42,000 troops and civilian defense jobs as well as mothballing its fleet of Harrier fighter jets, a stalwart of the skies for 40 years. . . .

[E]xperts nevertheless point to disagreement between Washington and London on some key issues, most notably the desire by Britain and France to see stepped-up U.S. involvement in Libya — a topic Cameron is likely to press Obama on this week. . . .

First and foremost in their talks this week, officials say, will be the need for Obama and Cameron to choreograph the pace of withdrawal from Afghanistan.

Cameron raised alarms in Washington by revealing plans two weeks ago for the early withdrawal of at least 400 British troops by next February — a decision apparently made public before deep consultations with his U.S. partners. The military cuts, experts say, are set to test that relationship further.

“There is considerable anxiety in Washington over the strategic implications of these sharp defense cuts, and I’m not sure the extent of that unease is fully appreciated here,” said Nigel Bowles, director of the Rothermere American Institute at Oxford University. “I would be surprised if that was not made more clear in the diplomatic exchanges this week.”  (photo: Reuters)