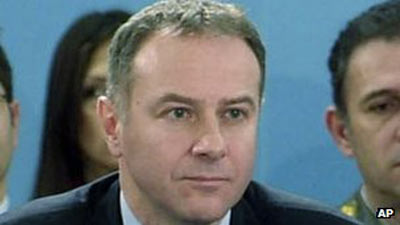 From Slobodan Lekic and Dusan Stojanovic, AP:  Serbia’s ambassador to NATO was chatting and joking with colleagues in a multistory parking garage at Brussels Airport when he suddenly strolled to a barrier, climbed over and flung himself to the ground below, a diplomat said.

By the time his shocked colleagues reached him, Branislav Milinkovic was dead.

His motives are a mystery. Three diplomats who knew Milinkovic said he did not appear distraught in the hours leading up to his death Tuesday night. He seemed to be going about his regular business, they said, picking up an arriving delegation of six Serbian officials who were to hold talks with NATO, the alliance that went to war with his country just 13 years ago.

Belgian authorities confirmed that the ambassador had killed himself.

"It was indeed a suicide," said Ine Van Wymersch of the Brussels prosecutor’s office. She said no further investigation was planned.

A former author and activist opposed to the authoritarian regime of Serbia’s former strongman Slobodan Milosevic, Milinkovic was outgoing, had a warm sense of humor and worked to keep good ties with ambassadors from other ex-Yugoslav countries, according to diplomats and acquaintances.

The diplomats, who spoke on condition of anonymity because they were not authorized to release details, said they knew of no circumstances — private or professional — that would have prompted him to take his own life.

But Milinkovic, 52, had mentioned to colleagues at diplomatic functions that he was unhappy about living apart from his wife, a Serbian diplomat based in Vienna, and their 17-year-old son. . . .

The death cast a pall on the second day of a meeting of NATO foreign ministers. Officials said they were shocked by the news of the death of a very popular and well-liked man.

NATO’s Secretary General Anders Fogh Rasmussen said he was "deeply saddened by the tragic death of the Serbian ambassador."

"As Serbian ambassador to NATO he earned the respect and admiration of his fellow ambassadors," he said.

From RT:  Milinkovic was at the Brussels airport to receive Serbian Deputy Foreign Minister Zoran Vujicm, who was due in the Belgian capital for NATO talks along with other officials. After the delegation arrived, they walked through the parking lot to their cars, and Milinkovic suddenly broke from the group, walked over to the barrier and jumped, an anonymous official said.

The Foreign Ministry recalled a respected diplomat and lawyer who had served in Vienna and Brussels.

"He remains in the memory of his colleagues as a skilled diplomat, a versatile scholar and a noble man," the Ministry said.

Milinkovic’s wife was informed of the news in Dublin and immediately went to Brussels. The couple have a six-year-old son.

Milinkovic, a lawyer by training, was appointed Ambassador to NATO in 2009. Earlier, he was a special envoy to NATO. Before that, he was a Permanent Representative to the OSCE and the United Nations. . . .

Serbia is not a member of NATO but joined NATO’s Partnership for Peace, PfP, in 2006.