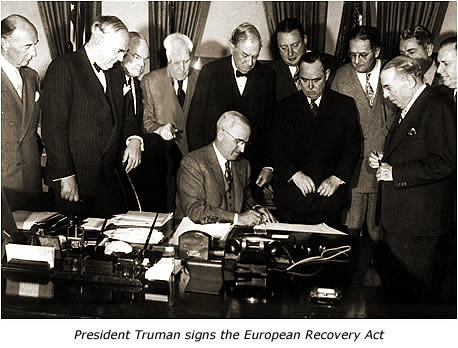 From the New York Times:  On April 3, 1948, President Truman signed the Marshall Plan, which allocated more than $5 billion in aid to 16 European countries. In signing the plan, officially called the Economic Recovery Program, Truman declared, “This measure is America’s answer to the challenge facing the free world.”

The Marshall Plan was necessitated by the devastation of World War II in Europe and the emerging U.S. foreign policy of containment. European countries suffered widespread hunger and high levels of unemployment, which made their governments vulnerable to upheaval. The Truman administration, fearing that Soviet communism would spread to the West, hoped to combat and contain it by helping to rebuild European economies.

The New York Times explained, “Foreign developments, including the Communist coup in Czechoslovakia and the electoral maneuvers the Communists are making in Italy, greatly helped the passage of the bill.”

The Marshall Plan was named for George Marshall, Army general and Truman’s secretary of state, who first outlined the plan while delivering the Harvard University commencement address in June 1947.

From the Harry S. Truman Presidential Library and Museum:    A recovery program of continental dimensions, the Marshall Plan expended more than $12.5 billion (equivalent to roughly $60 billion today) at a time when:

That the Marshall Plan became a reality was due to the energetic efforts of many individuals: the Republican chairman of the Senate Foreign Relations Committee, Arthur H. Vandenberg; British Foreign Secretary Ernest Bevin; eminent Republicans Henry L. Stimson and Robert Patterson who had both become secretaries of war under Roosevelt; Truman himself; and, of course, Secretary of State George C. Marshall, a man venerated by Truman as being "the greatest living American." Curiously, Joseph Stalin was also a key figure behind the passage of the Marshall Plan and Truman once remarked that without his "crazy" moves, "we never would have had our foreign policy. . .we never could have got a thing from Congress."

From History.com:  Under the Marshall Plan, the Economic Cooperation Administration (ECA) distributed $13 billion in aid over four years (1948-51). Most of the funds were given in direct grants, and the rest in loans. Seventeen nations in western and southern Europe received assistance, including the United Kingdom, Austria, Belgium, the Netherlands, Denmark, France, Sweden, Iceland, Ireland, Greece, Italy, Luxembourg, Norway, Portugal, Switzerland, Turkey and West Germany. The plan aided both agricultural and industrial productivity in Europe, and helped rejuvenate ailing industries like chemicals, engineering and steel. Participating countries saw their gross national products go up by 15 to 25 percent.  (photo: George C. Marshall Foundation)  (Marshall Plan Remix Video)