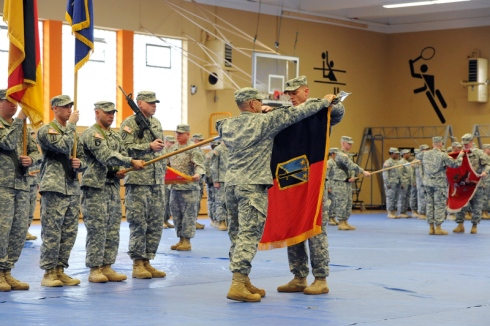 From Michelle Tan, Army Times:  The first of two brigade combat teams to be cut from U.S. Army Europe cased its colors Oct. 9, marking the halfway point in the complex process of moving more than 8,000 soldiers and their families, and accounting for and turning in thousands of pieces of equipment.

The 170th BCT was inactivated during a ceremony Oct. 9 in Baumholder, Germany. The other brigade, the 172nd BCT, will be inactivated in October 2013.

The cuts, announced earlier this year while both brigades were still deployed to Afghanistan, are the first in the Army’s plan to eliminate at least eight BCTs and shrink the active-duty force from about 560,000 soldiers to about 490,000 over the next five years.

While the 170th has officially been deactivated, there is still some work to be done, said Col. Mark Raschke, the brigade commander.

“We’ll still have a small cadre … that will continue to resolve any unresolved issues through the late November, early December time frame,” he said, adding that the brigade divided the complex task into three main areas: personnel, equipment and facilities.

From Matt Millham, Stars and Stripes:  Cpl. Hunter Keniry, a 29-year-old fuel technician with the brigade’s 3rd Battalion, 4th Infantry Regiment, only got here three years ago, but said he appreciated the history of the post troops have long called “The Rock.” He was with the brigade on its only deployment to Afghanistan, during which the unit lost nine men.

“This is a pretty big moment,” Keniry, of San Diego, said. “The wars are drawing down. It looks like the presence in Europe may not be as much as it was. And so, I mean, yeah, we’re kind of just standing here in the ceremony, but this is a very important event in terms of military history, regimental history, brigade history.”

The U.S. Army took over Baumholder from French forces in 1951, and soldiers from the base have taken part in every American conflict since, said Sgt. 1st Class Andrew Cox, another member of the brigade’s 3rd Battalion, 4th Infantry Regiment. “So, yeah,” he said of the inactivation, “it’s kind of painful.”

The 43-year-old Bradley mechanic from Kansas City, Mo., said this was “about the third” unit inactivation he’s gone through in his 26 years in the Army. “When I first got over here as a private in 1987, there were five full divisions over here. I mean, that’s 100,000-plus combat arms soldiers.”

Even as other communities drew down, Baumholder endured. Over the last couple decades, it was one of the most deployed communities in the entire Army, Cox said.  (photo: Michael Abrams/Stars and Stripes)