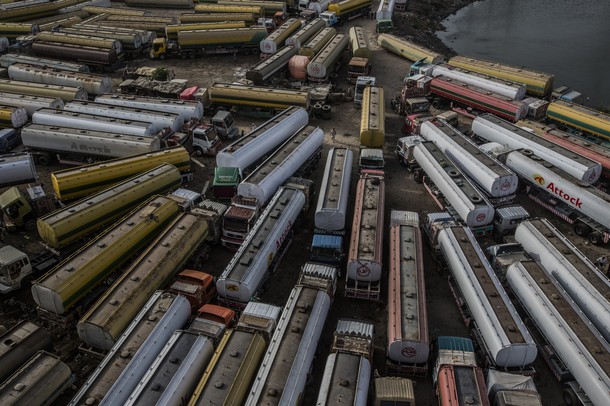 From the AP:  Bureaucratic delays have largely held up shipments to troops in Afghanistan via its eastern neighbor, Pakistani officials said Wednesday, a week after the country reopened U.S. and NATO supply lines.

So far, only a handful of supply trucks have crossed the border, which Pakistan closed to the convoys last November after American airstrikes accidentally killed 24 Pakistani border troops. Islamabad agreed to reopen the supply routes on July 3, after months of negotiations and a U.S. apology over the incident.

Two trucks carrying supplies to U.S. and NATO troops passed through the Chaman border crossing in the southern province of Baluchistan last Thursday, but a Pakistani customs official said that no other trucks have crossed since then.

Four trucks from the port city of Karachi arrived at the border Wednesday and are expected to cross on Thursday, the official added. Chaman is one of two border crossings used to transport NATO supplies.

Trucks have yet to pass at Torkham, the second crossing, a regional official in northern Pakistan said. Both officials spoke on condition of anonymity because they were not authorized to speak to the media. . . .

Before the closure, about 150 to 200 trucks carrying NATO supplies crossed the border daily.

Few expected shipments to reach those numbers immediately after Pakistan reopened the supply lines, and the delay did not seem to reflect a change of heart on the side of the Pakistani government. The trucks have been waiting in Karachi for months and need maintenance and proper customs clearance before any movement can take place, officials and drivers say.  (photo: Getty)